Adam Morgan encountered a challenging weekend at Yorkshire’s Croft Circuit but ensured he earned points in all three races on Sunday.

Round seven of the 2020 Kwik Fit British Touring Car Championship (BTCC) took place on the high-speed but tight and twisting North Yorkshire circuit that is a stark contrast to the open, sweeping corners of Silverstone, that hosted the championship last time out.

Pace had looked good in the practice sessions after the team had chosen an aggressive set-up, but rain just before qualifying on Saturday afternoon caused the car to be less sharp than in practice.

The Pall-Ex backed driver struggled to find consistent pace in his Carlube TripleR Racing Mac Tools Mercedes-Benz A-Class and this meant the Lancastrian would start in 12th place for Race One come Sunday morning. 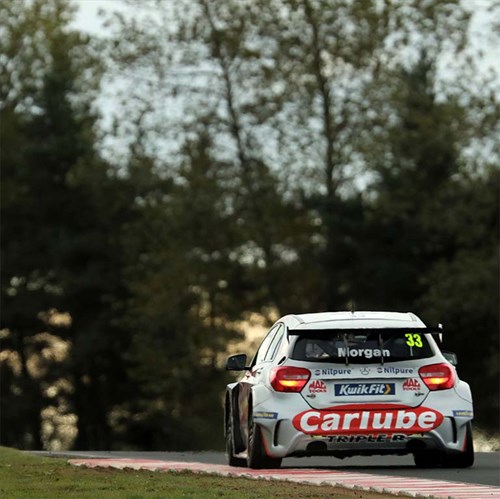 Optimism was the order of the day as the Ciceley Motorsport team arrived at the track on Sunday morning, as they felt confident Adam’s race craft, determination and outright pace could help him to climb up the order once the lights went out in Race One.

As had been hoped, Adam performed well in Race One, managing to avoid any contact as the tightly bunched cars around him jostled for position whilst navigating the 2.13 mile circuit.

Championship leader Ash Sutton made contact with Rory Butcher, towards the front of the pack and this saw Sutton drop down the order.

Adam benefitted from this and with a number of other moves expertly executed, Adam came home to claim ninth place in Race One.

This was a solid performance and earned Adam nine points in the championship.

Following the race, Adam said; “We’d gone for a set-up that was perhaps a bit too racy,”

I should have gone a bit safer on the rear end, the car felt a bit loose in places. That meant that I couldn’t quite hang on to everyone. Ninth place was ok, though.”

With the Race One result serving as encouragement, Adam would line up for Race Two in ninth place, from where he hoped to launch an assault on the cars ahead.

Off the line, he made good progress and was able to squeeze through some gaps, making up some places.

Sadly, Adam’s race was severely affected by a concertina effect at the end of the lap at the hairpin.

He commented; “Bobby Thompson tried to go round the outside and we clattered wheels,”

“Then the wheel arch came loose, the bumper cracked and was rubbing on the front right tyre all race. I was only just able to get to the end as the tyre was down to the canvas, so I was fighting a sinking ship, really! It was a horrible race…”

This damage meant Adam came home to finish in 13th position, frustratingly just missing out on the reverse grid draw.

As a result, Adam started the final race of the day in 13th place, and following an early safety car period, the Pall-Ex backed driver rediscovered some good pace in the car.

He began to make progress and close up to the cars in-front, but struggled to find a way past the rear-wheel drive Infiniti of Aiden Moffat.

Having been unable to pass Moffat, Adam would once again cross the line in 13th place, rounding out a frustrating weekend overall.

After the race, he reflected; “That was really disappointing,”

“He was so defensive that I just couldn’t find a way by anywhere so, although we had good speed at the end, I just couldn’t do much with it because I was stuck in traffic again.

­­“The positives are that, on a dry track, the car felt really good and was quick, but it was a bit of an average weekend really and part of that was because of the rain before qualifying which derailed us.

Had it not been for that, I think we would have been higher up the grid and had a different Race One which therefore improves the whole run of race day for you. I was hoping to break my duck this weekend here, but the duck won again…!”

The BTCC’s next stop is in Norfolk at Snetterton and will take place on the weekend of the 24-25thth October.

As always, all the live action will be shown on ITV4 and ITV4HD on Sunday 25th October.