Adam Morgan has continued his impressive run of form with a strong showing, including a podium finish at the home of British motorsport - Silverstone.

The Pall-Ex supported racer found himself towards the front of the pack all weekend as the Kwik Fit British Touring Car Championship (BTCC) continued.

Following a disappointing meeting last time out at Thruxton, where Adam’s fast pace had been undone by the same part in the power steering failing twice in two races, the results at Silverstone saw the Lancastrian finally earn what his pace deserved. 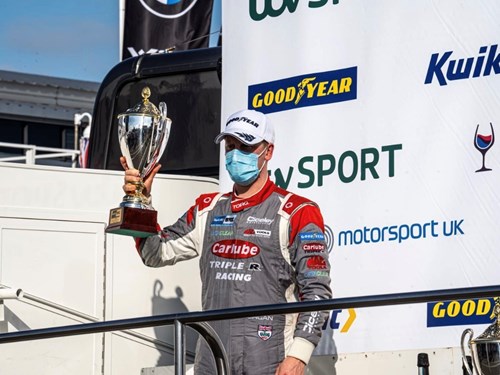 A successful qualifying session on Saturday meant Adam would start in a very respectable eighth position for Race One on Sunday, but with the pace in the car to push further forward come lights out.

On Sunday Adam took his grid place ahead of Race One full of optimism.

Once the lights went out, Adam made good progress, battling hard within an evenly matched field.

In a frantic race, Adam was able to pass a number of cars, finally coming home to earn sixth place.

After the race, Adam climbed out of the car and commented; “That was a good start to the day.

The car had good pace. I wasn’t as quick as the top three but I was quicker than just about everybody else, so I was able to fend them off and build a bit of a gap, I was happy with that."

“It is a gain of two places from where I qualified so we are heading in the right direction.”

Following his strong showing in the first race of the day, Adam lined up in sixth position on the grid for Race Two.

From here the Ciceley driver got a great launch off the line and thanks to contact between the Championship contender Ash Sutton and Rory Butcher at Becketts up ahead, Adam was promoted to fourth place behind Tom Ingram, Dan Cammish and reigning champion Colin Turkington.

After slightly losing touch with the back of the lead three cars, Adam found himself in a nice pocket of space on the track, with a comfortable lead on the cars behind.

As the laps continued to fall, Adam held his position and looked set for another strong result in fourth.

However, the reliability issues that had befouled him in Thruxton now struck his rivals.

Leader Tom Ingram suffered a front-left puncture which saw him tumble down the order.

His misfortune saw Adam move into third place, where he stayed to claim a fantastic podium and an independents team win, which was a fair reflection of his impressive pace all weekend.

After the race, Adam reflected and said; “We made a late decision to do a spring change at the front.

“Steve Farrell and I were at loggerheads making the decision but we did it and we only just got out of the pit lane in time, so I have to say thanks to the team: everyone did a great job!

“It proved to be the best call of the weekend because the car was so much better in the places where I had been struggling, namely Becketts and Luffield.

I found loads of time there so Race Two was mega and a podium is a great result again. I’m really happy with that – I’m almost lost for words!”

Race Three would take place in the golden glow of a late September sunset, and thanks to the reverse grid draw, Adam started seventh.

On lap one, one of the biggest incidents for a number of years saw Rory Butcher’s ford smash into the barrier at Becketts before rolling back onto the track, which brought out red flags, stopping the race.

Thankfully the Scot was relatively unscathed by the impact and walked away from the car, before being taken to the circuit medical centre for precautionary checks. 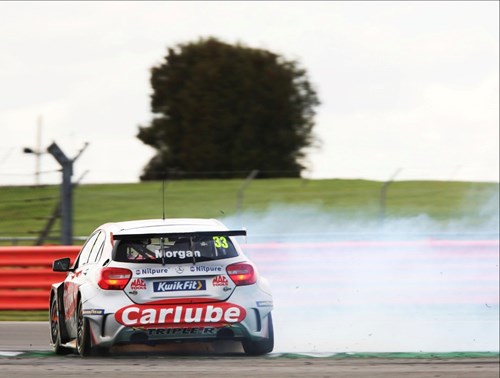 The race resumed as the sun was well and truly setting, so it was limited to a 12-lap dash around the Silverstone National circuit.

Starting from sixth at the restart, Adam fought bravely to hold onto position, but oil from another car caused him to run wide in a number of corners.

Adam and other cars continued to be caught out by slippery patches on the track, but a number of good moves helped Adam make his way up into fifth before the chequered flag fell, only losing out on fourth place on the last lap due to a small gremlin in the power steering.

This result topped off a fantastic weekend for Adam and the team.

After returning to the garage, Adam reflected; “That was proper bruising, elbows-out touring car racing!

“My race was pretty good and Silverstone always gives good racing but race three was bonkers! I finished fifth which was really good with the weight that I had gained for the podium in Race Two.

I was strong all weekend, I was where I wanted to be in qualifying and I’ve been in the top seven or eight all weekend against manufacturer teams. Everyone says the Carlube Triple R Racing Mac Tools Mercedes-Benz A-Class is strong at Thruxton and we wanted to prove it can be strong elsewhere so three top sixes make a great weekend for sure.”

The weekend’s fantastic points haul sees Adam maintain his eighth position in the overall championship and fourth in the Independents’ Trophy.

The BTCC’s next stop is in North Yorkshire at Croft Circuit on the weekend of the 10-11th October.

As always, all the live action will be shown on ITV4 and ITV4HD on Sunday 11th October.