Pall-Ex's Director of Sales and Marketing enjoyed success in the final round of the Milltek Volkswagen Racing Cup.

Mark Steel finished his debut Volkswagen Racing Cup season in style with a VAG Trophy win in the final round.

Pall-Ex’s Director of Sales and Marketing took the chequered flag at the end of the 20-minute race at Donington Park on Sunday to claim the full 44 points for the victory, plus a bonus of two championship points for the fastest lap in his class.

This secured Mark’s second place in the VAG Trophy championship and rounded off a successful maiden season.

On his win, Mark said; “Today felt pretty special, the conditions were difficult with a very greasy track, and the initial few laps were very slippery.  I opted for a dry set-up which worked with a drying track, and my closest competitor had a semi-dry set-up which wasn’t going to work in the later stages.  It is great to finish the season on a high, I can’t wait to start planning for next year.”

The success on Sunday was a welcome relief for Mark, as Saturday had seen Race one cut short by mechanical failure after just three laps.

The gearbox in his Golf R suffered a failure, ending his race prematurely while title rival Simon Tomlinson went on to claim the victory, which confirmed him as the VAG Trophy champion for 2018.

Reflecting on the failure, Mark commented; “That one mechanical failure ended my chances of a debut championship win which would have been massive.  The highs and lows of motorsport are incredible, but I have to say congratulations to Simon, he’s deserved it as his consistency has been impressive.” 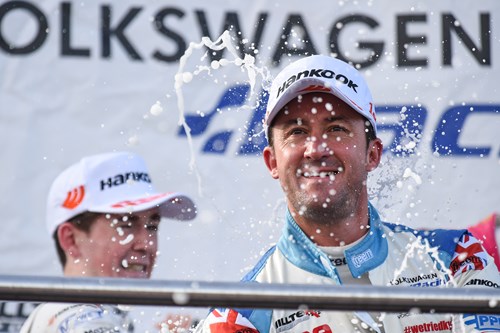 Now the season has come to an end, Mark is already setting his sights on next year when he hopes to make the step up to the Milltek Volkswagen Cup.

The series will offer much more competitive racing, with around 15 entrants guaranteed in every race.

This prospect is exciting, and Mark is looking forward to the challenge.

He said; “The standard of driving in the full Milltek VW Racing Cup is high.  Many of the competitors  are aiming higher and are looking for careers in BTCC or even British GT.  To be on the grid with these guys is a dream come true and I have to thank all of my sponsors for their continued support.  It can sometimes seem forced when drivers thank sponsors, but in my case, it is entirely different.  Without these friends supporting me, I really could not be doing what I do.  I try to ensure that the brands that are associated with myself and the car are pushed hard to give some genuine return on investment.  I hope that it is suiting us all!”

Congratulations on your success this season Mark, and good luck next year!