The Pall-Ex backed racer headed into the weekend full of optimism, having gone well in testing there earlier this year and winning at the Hampshire venue last year.

The Ciceley Motorsport team was also on a high following the remarkable come back at Donington Park in April, following a big impact in Race One.

Free practice proved to be a challenging session for Morgan, as he struggled to dial his Mercedes-Benz A-Class into the recently resurfaced track.

Despite this, Adam entered qualifying on Saturday afternoon focussed and with the front row of the grid in his sights.

He set the fourth fastest time of the session, provisionally placing him fourth on the grid for the Race One on Sunday.

Unfortunately, the stewards decided that the Pall-Ex racer had exceeded track limits on his two fastest laps, which saw him demoted to 18th place on the grid for the first race.

After the session, Adam said: “The car just hasn’t felt as I wanted it to. We tested here and went well, and we have won here so we know that the car works but today we just don’t seem to have found the sweet spot in the car.

“Others are saying the same thing so whether it is the new track surface bedding in and changing we don’t know, but we will analyse everything for tomorrow.” 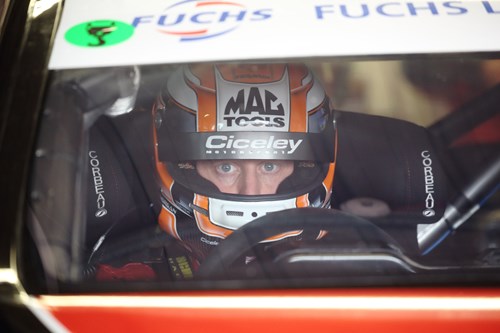 On Sunday, Adam lined up for Race One determined to make amends for qualifying.

Once the lights went out, he was in the thick of the crowded midfield pack.

Racing in such tight confines, Adam made contact with Scotsman Aiden Moffat at the chicane, who then slid sideways, momentarily slowing Adam’s progress.

Following this, Morgan was involved in a tough fight with Chris Smiley in his Honda Civic for most of the race.

Towards the end of the race, the Ciceley Motorsport Mercedes was out-dragged by Ollie Jackson’s Ford Focus, leaving Adam to come home in 17th position.

Looking back Race One, Adam commented: “The track seemed to change again. The circuit seemed less grippy today and I really struggled with understeer.

We will go with a more aggressive set-up for race two and see if that is the answer and hopefully that, plus the warmer weather now, will help us make progress.”

In Race Two, Adam started in 17th position and delivered a stellar performance to cross the line in 13th, scoring 3 points for his troubles.

Post-race, the Lancastrian reflected: “The set-up was better, but we still felt that we were missing something, there was definite progress. That puts us in a better position going into race three because we are higher up the grid.”

Unfortunately, Race Three did not bring the success Adam and the team were hoping for.

Morgan’s Mercedes was confronted by a Rob Collard’s Vauxhall Astra sat sideways across the track following a spin at turn three on the opening lap.

With nowhere to go, the Pall-Ex backed driver smashed into the stranded Astra, and broke his right front suspension.

This damage was terminal and Adam was out after less than half a lap of the final race.

Clearly frustrated after the race, Adam said: “I’m gutted because it has been a tough weekend. I was just in the wrong place at the wrong time because I was tucked up behind another car and saw Rob too late, but I really felt that we could have made good progress in that race.

“We’ve had two tough BTCC weekends, Donington and now Thruxton and whilst all the Ciceley guys have worked so hard, we just don’t seem to be able to unlock the true pace of car at the moment.

“We will go away, repair and study data to work out what has changed and what we can do to get back to the front of the grid, which is where we know we should be. Croft hasn’t been that kind to us in the past but it has to be a brand-new start this year!”

Adam leaves the third round of the BTCC at Thruxton in 13th position in the Kwik Fit British Touring Car Championship and sixth in the Independents Trophy.

The BTCC heads north to Croft Circuit in North Yorkshire on 15-16th June, and Adam and the team will be hoping to bounce back from the disappointment of Thruxton.

Although this has not been a happy hunting ground for Morgan in the past, he will be doing everything he can to change this.

You can follow Adam’s progress and all the race-day action live on ITV4 from 11 AM on Sunday 16th June.

In the meantime, you can keep up to date on all of the latest BTCC news here.