The ethos of Manchester based Harbour Freight has always been flexible, yet service focused, and it is this mindset which resulted in them winning the Business Development award at Pall-Ex Group’s annual awards in 2021, after growing their business during the pandemic.

The reason for Harbour’s success has been its ability to adapt its asset base between company owned equipment, such as trailers and vehicles, to leased and contracted equipment, enabling them to upscale quickly when required. This, coupled with having a broad customer base and not working exclusively in any sector, has proved invaluable over the last 12 months.

Harbour Freight maintains a high level of personal attention to detail and sense of loyalty to its customers. The company tagline, “the difference is the service”, has been proven in its 96% customer retention levels, many of whom have used the business for 30 years or more.

Steve Swinburn, Harbour Freight’s UK General Manager, comments “From the Group Directors to the Department Managers, everyone is extremely hands-on, passionate and committed to our business and customers”.

Furthermore, if growing a transport business in the middle of a pandemic was not enough, Harbour Freight also launched, what is now, a very busy Customs Clearance Division. 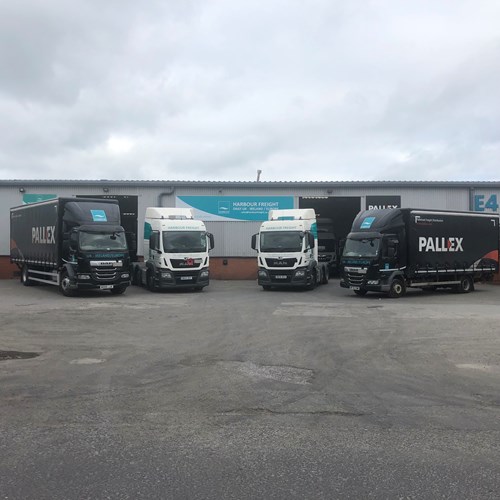 After researching network services, Harbour Freight saw synergies between the business and Pall-Ex, teaming up six years ago. Steve sees it as one of the best decisions Harbour has made, commenting: “Pall-Ex best matched our ethos, values and approach to business. The proactive style of operating and seeking continuous improvement makes Pall-Ex the clear market leader and working with them has undoubtably proven to be the right choice for our business.

Being a shareholder member and owning a part of our network has really empowered the leadership team and our colleagues. Having a say in the decision process and knowing our opinion is truly valued has been refreshing. Access to expertise both within Pall-Ex and the wider membership community has proved invaluable to our business”.

With a business culture based around ‘every day is a school day’, Harbour looks forward to the establishment of the Academy of Excellence within Pall-Ex and benefiting from shared best practice.

Harbour uses the MyNexus platform, which has helped it to transform its UK pallet service and client order visibility. Another key benefit has been a reduction in inbound customer calls, down 40%, with the customer experience being further improved with enquiries being responded to instantly.

Steve would urge other Hauliers not to delay in joining the Pall-Ex network: “It really is the best thing you can do - why be part of a network that you have no real say or control over? Pall-Ex is forward thinking, always evolving and never stands still. It is the future, join us!”.

Harbour Freight was awarded the Business Development accolade this year in recognition of its forward-thinking approach. Awards given by Pall-Ex are significant as they represent recognition of excellence by peers and the wider network.

Pall-Ex praised Harbour’s unique customer focus, personal attention to new clients and the fact that it offers something different, refreshing and modern to customers. With transport, logistics and pallet deliveries moving with the times, Harbour has not stood still and instead has embraced a new way of working. This, and having the support of the Pall-Ex shareholder members makes Harbour different and helps it gain and maintain new business year on year.

The company was founded in 1982 in Dublin by Colm French Snr, later opening an office in Manchester, offering freight forwarding and customs clearance services. This was before the Single Market, when standing in queues at customs hatches was the norm.

Harbour offers Irish Sea, express parcels, groupage, pallets and full loads which feed into its own network. UK domestic pallet services are made via its Pall-Ex shareholder membership, plus there is warehousing, pick and pack fulfilment and general worldwide forwarding. Most in demand, are groupage services to Ireland and Northern Ireland.

At the heart of the North

After Harbour Freight was acquired by the JMC Group in 2013, the business moved to its current facility in 2016, a large site on the perimeter of Trafford Park which is close to the M602 and M60 networks. Importantly, the location is right in the centre of Harbour’s Network area and near most of its Manchester customers. The Group has 22 depots across Ireland, strategic partnerships across Europe and global reach through its membership of CTN Worldwide.

Looking to the future

Harbour Freight is mid-way through a €24 million investment in its new Dublin facility and will be investing £6 million in its new Manchester facility, with the aim to have both sites operating by Q3 of 2021. It is looking to expand all aspects of the business in terms of facilities, vehicles, distribution area both organically and through acquisitions.

Steve concludes: “We see a solid, bright future for Harbour and being part of Pall-Ex makes that even brighter.”

Find out more about becoming a shareholder member of our pallet network.