Toro Verde GT made its debut in Lamborghini Super Trofeo Europe last weekend (July 29-August 1), with a tough visit to the legendary Spa-Francorchamps in Belgium. 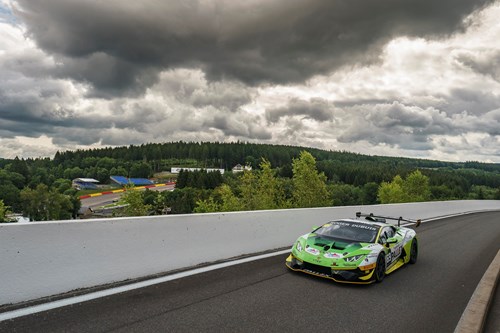 Making a switch from the GT2 European Series, in which it started the season, the team took its Lamborghini Huracán Super Trofeo EVO to the home of the Belgian Grand Prix hoping to make a mark as the only British team competing in the series.

With a priority in getting David Fairbrother laps behind the wheel and getting the car setup well for the two races, the team ended the opening practice session eighth in the Pro-Am Cup and 21st overall, and with Jordan Witt also getting laps in the second session, the team finished seventh in class and 15th overall, showing good progress.

With each driver competing in separate qualifying sessions to set the grid for the two races, David was up first, suffering bad luck as he was on a quick lap towards the end of the session when a Full Course Yellow came out, which turned into a red flag, leaving him seventh in Pro-Am and 25th overall.

Jordan took part in the second session and was quickly on the pace, running sixth in class and 15th overall. On his second flying lap, which was looking to be even faster, he had an incident between the flat-out Blanchimont corner and the final chicane, spinning into the wall at high speed.

The session was stopped so he could be taken from the car and, after an assessment at the circuit’s medical centre, was taken to Verviers Hospital for further checks on a painful ankle. Thankfully he was discharged with soreness and bruising and is now resting up, while the car itself needs to be rebuilt after the heavy impact.

Reflecting on the event, David Fairbrother commented: “It’s a shame the weekend ended early, but these things happen in racing and the main thing for all of us is that Jordan was okay.

“You don’t tend to have small incidents at Spa, so to have him back with us a few hours afterwards was great to see.

The car felt great, so credit to the team for that, and we were making good progress on track. The guys will do a good job getting it back into shape and we’ll be looking forward to getting back on track soon.”

Following his incident, Jordan Witt said: “I didn’t want our first weekend racing in Lamborghini Super Trofeo Europe to end the way it did, but I want to say a big thank you to the marshals and medical staff as well as the team for looking after me. We’ll regroup and be back at full strength for our next races out on track.”

Finally, Team Principle Chris Jones spoke about the team’s progress and what had been a promising weekend. He commented: “The main thing is that Jordan is safe and well after going off. Lamborghini builds its cars really strong and it’s a testament to them that he ended up a bit battered and sore rather than sustaining serious injury.

“Up to that point things were going well for the team. We were getting our laps in and showing some good pace against a grid of experienced teams and drivers who have been racing in this series for a long time, so there are positives we can focus on.”

Toro Verde GT will be back on track at Snetterton in Norfolk for the next rounds of the Ginetta GT5 Challenge, with Mark Steel, over the weekend of August 7/8, while the team hopes to return to Lamborghini Super Trofeo Europe in the future.