Tio Ellinas pulled off an incredible fightback to become the 2018 Porsche Carrera Cup GB champion on a remarkable final day of the season at Brands Hatch.

Tio Ellinas pulled off an incredible fightback to become the 2018 Porsche Carrera Cup GB champion on a remarkable final day of the season at Brands Hatch.

Coming into the day the Cypriot was eight points behind rival Dino Zamparelli, but two podium finishes were enough to give him the title after both 17-lap races.

Only able to qualify in sixth place on Saturday afternoon, things looked bleak for Tio’s chances. However, Zamparelli lost control of his car on coolant dropped by another entrant while leading race one and fell to the rear of the field, meaning Tio’s third-place put the pair level on points going into the final contest of the year. 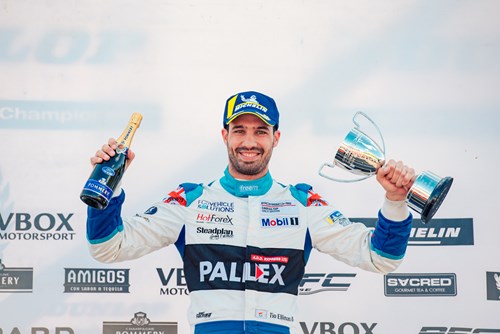 Starting fifth for that race, Tio did well to avoid a spin from pole-sitter Michael Caine and attempted to take second place from Tom Jackson before being pushed wide and falling back to fourth. He kept calm and patiently waited for his moment to pass Jackson later in the race, to score the second podium and claim an emotional championship victory.

Reflecting on the weekend, and the season, Tio said; "It’s an amazing feeling. I can’t find the words at the moment to describe it, but from the day that this deal happened, we've just tried our best to do everything possible to make this happen and finally, we did it. We were so consistent through all our races, we had many podiums, but we were just missing the edge sometimes to finish on a high. Overall it has just been a great, great season."

It was also a weekend of success for DVF Racing’s David Fairbrother and Richard Hawken in the Am category. Capping a sweet return after missing several races this season, David finished second in race one and held off late pressure from Richard in race two to claim third.

David commented; “A bunch of daft lads have just won the Carrera Cup! The first race was really good, and we were on the podium again with second. In the second race I had some tyre issues, and the pressures went up a little bit, so I had to back off and fell into the clutches of Richard and had to defend for the last three laps. He got along-side once, but we were able to bring it home for another podium in third place.

It’s been a mega weekend, and the team have just done a great job. It makes me very proud."