Pall-Ex Group is proud to be supporting Toro Verde GT as it takes on the GT2 European Series.

Pall-Ex Group is proud to be sponsoring Toro Verde GT as it takes on the inaugural GT2 European Series. 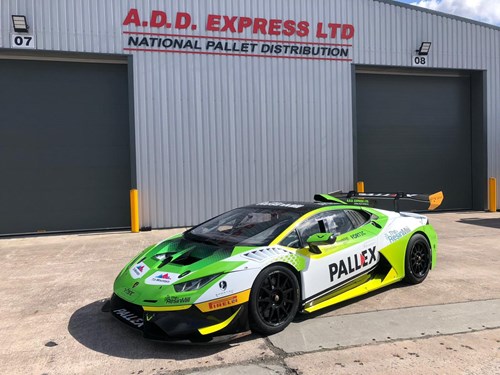 The newly formed British squad will run a Lamborghini Huracan GT2 for David Fairbrother and Jordan Witt at all five events in the upcoming 2021 season, starting at Monza, Italy this weekend.

Fairbrother, Managing Director of Pall-Ex shareholder member A.D.D. Express, is an experienced GT racer at this level, having previously enjoyed outings in British GT, Porsche Carrera Cup Great Britain, Lamborghini Super Trofeo, as well as flagship events such as the Dubai and COTA 24 Hours, plus the Gulf 12 Hours.

The 55-year-old also secured the 2015 GT Cup UK title in the GTB class, and will be one to watch, as will team-mate Jordan Witt.

Witt – winner of the Silver Cup class at the globally-renowned Total 24 Hours of Spa in 2019 and an outright race winner in British GT – makes his return to continental action with the support of long-term backers Vibe Audio and Yelir World.

The 30-year-old from Nantwich also has an outright victory in British GT to his name, as well as appearances in the Blancpain GT Series Endurance Cup (now Fanatec GT World Challenge Europe Powered by AWS), Porsche Carrera Cup GB and International GT Open, making for an exciting addition to the series’ inaugural grid.

“I’m really excited to be joining the grid for the 2021 GT2 European Series with Toro Verde GT,” said Fairbrother.

“The Lamborghini Huracan GT2 is a brilliant car, and with an experienced racer in Jordan alongside me, we’ll be pushing hard to bring home some strong results.

“Thanks to Pall-Ex Group for their part in putting this programme on the grid – now for the fun part! It’s exciting to be here at the start of a brand-new series, and I can’t wait to get going in Monza.”

“I’ve known David for a number of years and although we haven’t shared a car together, we’ve shared some good times off the track.

“It’s good to finally be teaming-up in a car and hopefully we can progress well in GT2 European Series and push forward from the opening round at Monza.”

Following the season-opening double-header at Monza, the series takes in further events at Hockenheim, Silverstone and Spa before concluding at Paul Ricard in the autumn.

Make sure you keep up to date with Toro Verde’s season by following Pall-Ex’s social media channels by clicking the following links: Facebook, Twitter and LinkedIn.