Adam Morgan withstood immense pressure to hold on to an impressive second place, which capped off a strong weekend at Snetterton circuit.

In the final race of the day of the Kwik Fit British Touring Car Championship (BTCC) at Norfolk’s premier racing circuit, the Pall-Ex backed driver was able to fend off the charging Ford Focus of Rory Butcher to claim yet another impressive podium, taking his tally to three for the season. 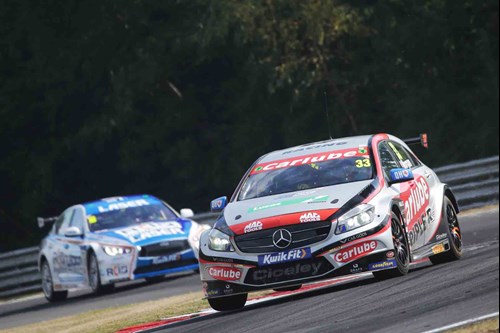 Having found good pace on Saturday morning, clocking the second-fastest time of the session, Adam and the Ciceley Motorsport team had hoped to replicate this in new style Qualifying in the afternoon, which would see a “Top 10 shootout” decide the starting order.

However, Adam was adjudged to have twice exceeded track limits, which meant his fastest times were withdrawn and the Lancastrian finished the session in 10th position.

This meant he would start 10th come Race One on Sunday morning, with plenty of optimism that his practice pace would help elevate him during the race.

In what was a close race, with lots of wheel-to-wheel action, Adam was able to fight his way through the pack, avoiding any contact.

Adam was assisted by the coming together in the early laps between Tom Oliphant and Ash Sutton, which saw Oliphant spin out, elevating the cars behind.

After the solid performance, earning a good points haul, Adam commented; “Solid race that really, we are getting closer to the business end of the race season and I need a good haul of points to ensure I finish on the right side of the top ten.”

Lining up in seventh position for the second race of the day, hoping to build on the positive result from earlier in the day.

However, at the end of the exciting and very close 14 lap race, Adam had slipped to ninth place.

Testament to the closeness of the race was that the top 10 finishers were covered by just 5.4 seconds!

Following the race, a disappointed, but not disheartened Adam reflected, saying; “That was a tough one, but still a top ten!

There was carnage everywhere and I was lucky to avoid at least three crashes.”

Despite the slight disappointment of Race Two, Adam had ensured he was in the running for the reverse grid draw in Race Three.

Luckily, the racing gods were kind to Adam and the draw saw him line up on the front row of the grid beside pole-sitter, Chris Smiley.

Once the lights went out, Smiley bogged down and struggled to get away off the line.

Adam, meanwhile, had a near-perfect start and he launched his Mercedes-Benz A-Class into the lead, heading down the long straight into turn one.

From here, he immediately found himself under enormous pressure from the Ford Focus of Ollie Jackson and despite his best efforts, couldn’t keep him at bay, as Jackson made one of the moves of the season, sliding past around the outside of the challenging Agostini corner.

Now in second position, Adam came under pressure from Jackson’s team-mate, Rory Butcher, who looked as though he would soon follow Jackson past.

However, an expert defensive display from the Ciceley Motorsport driver held off Butcher, who soon came under increased pressure from the fastest man on track, Tom Ingram in his Toyota Corolla.

With Butcher now otherwise engaged, Adam could focus on Jackson.

Snetterton is a notoriously tough circuit to overtake on and Jackson’s defence added to the challenge.

As the laps continued to tumble, Adam was virtually pushing Jackson’s Ford around the track at times, but was unable to find a way past!

Jackson held on and eventually came across the line to secure his second win in the BTCC and Adam claimed his third podium of 2020, confirming his outright pace and confidence in the car.

After celebrating with the team and on the podium, Adam commented; “I loved that race!

“I  have been suffering from an unfortunate ‘wobble’ and Jackson was able to take advantage of the only one I had during the entire race.

We had great pace toward the end of the race and I was convinced I was going to get him back, but fair play, he drove very well under immense pressure and deserved the win.”

The strong result at Snetterton sees Adam climb two positions in the overall championship, now sitting in an impressive seventh.

The Lancastrian also maintain his fourth position in the Independents’ Trophy.

The BTCC’s next stop is the season finale at Brands Hatch, on the Indy Circuit, a track that always creates scintillating racing.

The event will take place on the weekend of the 14-15th November.

As always, all the live-action will be shown on ITV4 and ITV4HD on Sunday 15th November.