Pall-Ex’s Director of Sales and Marketing fought against the sodden conditions at Silverstone last weekend, as he claimed two points-scoring finishes in Round Three of the Volkswagen Racing Cup.

On Saturday, Mark took to the track, built on a former World War Two airfield, for qualifying in challenging conditions.

This session was the first time the Pall-Ex man had ever taken part in a full wet qualifying session, using full wet tyres, meaning the learning curve was steep.

Despite this, Mark drove his MK7 Golf around the 3.6-mile circuit in a time of 2:50.007, earning him 12th place on the grid for Race One on Sunday morning.

After qualifying, Mark commented; “That was the first time I’ve qualified in conditions like that, and I really had to be on my toes.

The car felt good and the guys from SlideSports have done a great job in changing the set up to adapt to the wet track. I’m happy with my position for tomorrow."

“Obviously I’d like to be further up the grid but starting in 12th I can hopefully push on into the Top 10 in Race One!” 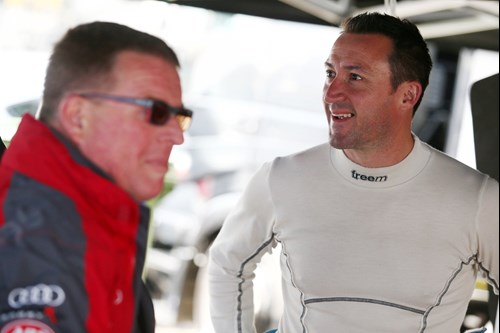 Sunday would prove to be a much better day for weather, as the rain that had lingered all day on Saturday departed, leaving sunny spells over the Northamptonshire circuit.

From 12th on the grid, Mark made a steady start in Race One, and he maintained his position into turn one.

As the lap progressed, Mark benefitted from battles in the leading pack which saw, among others, leader Josh Coggan spin off in the high-speed Maggots and Becketts complex.

By the end of lap one, Mark was up to ninth position, and from here, he battled with Lewis Smith for the majority of the race, eventually overcoming Smith’s Scirocco to claim eighth position as the flag fell, to bring the 20-minute race to an end.

Unfortunately, Mark was handed a five-second penalty by the stewards for exceeding track limits during ng the race.

This penalty saw him demoted to ninth place. 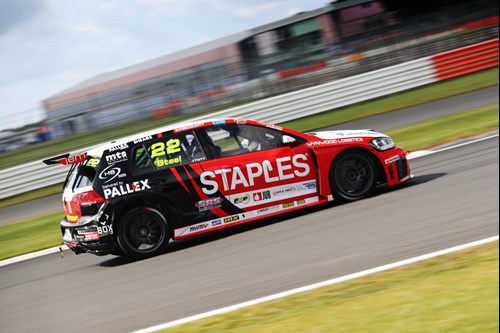 After the race, Mark reflected on his performance, saying; “My start wasn’t great, but I was able to hold my position into Copse, which was important.

“I just wanted to keep out of any trouble while everyone else battled and tangled with each other. Luckily I was able to do that and the incidents ahead put me in a solid position at the end of lap one.

The penalty is frustrating but I’ve lost only one place from it, so it could be worse.

“I’ll start in ninth position for Race Two later, so hopefully I will be able to climb even further up the order, and earn some serious points.”

In Race Two, Mark once again held his position off the line, but within a couple of laps, he had fallen to 14th position and had some work to do in order to recover some points.

This race proved to be tougher than Race One, and he was only able to climb back into 12th place before the end of the race.

Once he had returned to the paddock after what had been a disappointing session, Mark said: “That was a real shame.

“We were in a good position and I wanted to capitalise on the opportunity to score good points.  I struggled to keep some of the guys behind me, and before I knew it, I was in 14th.

“I’m pleased that we were able to climb back into 12th, but there is definitely more to give in a few weeks-time at Donington.”

For more information on the weekend at Silverstone and the Volkswagen Racing Cup, click here.

Mark heads to Donington Park in two weeks time and in doing so, returns to a circuit where he won his class last year in the VAG Trophy.

He currently sits in 11th position in the championship standings and will be hoping to increase his tally at the East Midlands circuit.

You can keep up-to-date with Mark’s results and timings by clicking here.

On Sunday 23rd  June, you can also livestream both races on YouTube, so you don’t miss any of the action.