Mark Steel takes to the track at Silverstone this weekend.

Mark Steel heads to the home of British motorsport this weekend as the third round of the Volkswagen Racing Cup takes place at Silverstone.

The Pall-Ex Director of Sales and Marketing will climb behind the wheel of his MK7 Volkswagen Golf at the Northamptonshire circuit for practice and qualifying on Saturday 8th June, and then line up for two races on Sunday 9th .

Mark has made a solid start to the 2019 campaign, having secured points finishes in both previous rounds.

Last time out at Snetterton, Race One was abandoned after just two laps due to a serious accident which saw one car flip and land on-top of a tyre barrier. Later, Mark was able to climb to 10th position in a Race Two that was heavily disrupted by the safety car. 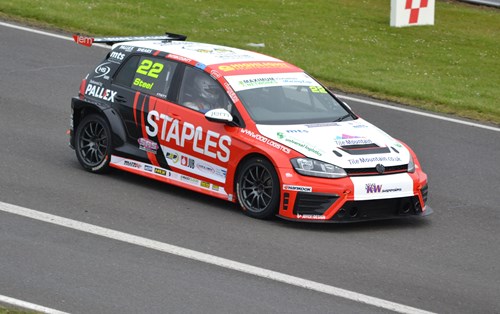 Looking ahead to the weekend, Mark commented; “I’m excited to get out onto the track again. I was at Silverstone a few weeks ago for testing, so hopefully that will really help me dial into the circuit earlier than a few others on Saturday.

“Hopefully a strong Saturday will stand us in good stead for the races on Sunday and I can have my best result of the season so far and improve my position in the championship” he added.

Silverstone is the only FIA Grade One track in the UK, meaning it can host top ranking events such as Formula One and the World Endurance Championship.

On the circuit, Mark said “It’s a fast track, there’s no doubt about that! We are using the full Grand Prix circuit, so all the famous corners will be in use. Stowe is the trickiest to get right at the end of the Hangar Straight.

It will be great to get out there and push the limits on what will be the fastest circuit we drive this season.”

Read more about Volkswagen Cup at Silverstone this weekend here.

You can keep up to date with Mark’s race weekend by clicking here, for live timings and results.

Also, be sure to catch both races live on YouTube here.