Mark Steel enjoyed his “best weekend yet” in the Volkswagen Racing Cup, taking home the Hankook Trophy for his performance in Race Two at Croft Circuit.

Last weekend was the first time Mark had visited the North Yorkshire circuit, and to prepare for his races, Mark spent last Tuesday evening in a simulator with fellow racer Rob Allum, and then tested all day on Friday at Croft.

Having learned the track as well as possible, Mark was confident that he would qualify well.

On Saturday morning, he took to the track in his Staples sponsored MK 7 Golf, prepared by the SlideSports team, for what was to be a reasonable session.

The Pall-Ex man was able to navigate the track, built on a former World War Two airfield, in a time of 1:31.386, placing him in tenth position on the grid for Race One later that day.

After the session, Mark commented: “It was an ok session, but I know I could have gone quicker

I’m still learning the intricacies of the track and the times will come over the course of the weekend, I know it.

We are in a good position for Race One that will allow me to push on towards the front.” 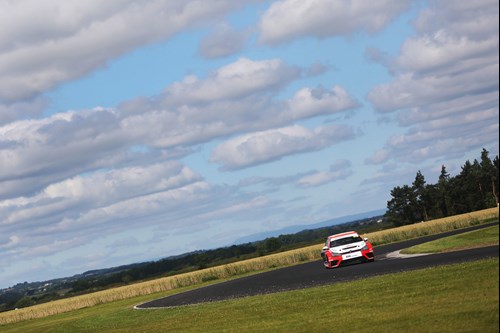 As the afternoon passed, the temperature rose, and the track was considerably hotter than it had been for qualifying.

This difference in temperature would be a challenge for all drivers, as their set-ups had favoured cooler conditions.

From lights out in Race One, Mark struggled to keep pace with the surrounding cars that he had been faster than in qualifying.

His lap times fell away compared to those around him and he dropped  to 11th place.

Mark only reclaimed tenth place after Richard Gilbert crashed his VW Golf in the latter stages of the race.

Once he returned to the pits, Mark said: “ That was tough. The car felt loose and my pace just fell away.

It could have been the track temperature that caused tyre pressures to drop, but the car felt nowhere near as sharp as this morning, but that’s no excuse.

I’m really disappointed with my performance in that race and I need to have a word with myself tonight and really go over the data to see where I can improve.”

Once he was in the paddock, Mark encountered a number of spectators who recognised the Pall-Ex branding on his car.

They called him over and told him they were employees of Pall-Ex member, Moody logistics and Storage based in Cramlington, Northumberland.

“This was a real boost after a tough race” Mark commented. “It was great to see the guys from Moody’s.

The support and encouragement from some friendly faces can make all the difference sometimes and I really appreciated them coming out to watch this weekend.” 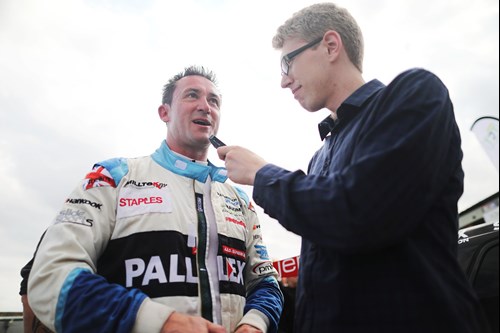 On Sunday morning, the SlideSports team worked hard to make some set-up changes to Mark’s car ahead of Race Two.

In addition to this, David Fairbrother, owner of Pall-Ex member A.D.D Express Limited and former Porsche Carrera Cup GB racer, was on hand to further encourage Mark, and convinced him that he is on the grid by rights, and could really deliver in the next race.

As the competitors lined up for Race Two, the Pall-Ex Director had renewed motivation, as he had a point to prove to himself after Race One.

Off the line, Mark made a good start, but made significant contact with Matt Evans on the exit of Turn 3, that nearly took both drivers out of the race.

Fortunately, both were able to regain control and carry on, with only superficial damage.

From then on, Mark managed to make good progress through the field, whilst making sure to avoid contact.

The new set up, which included new front tyres, a shift in brake balance and stiffer suspension seemed to work well.

Mark came across the line at the end of Race Two in eighth place, and the highest ranked finisher that has not yet been on the podium this year, meaning he won the Hankook Trophy.

After spraying the champagne on the podium, alongside the winner, Rob Allum, Mark reflected on his Race, saying: “That was the best race of the season so far. Everything came together and I am very proud of how I raced today.

My times were very close to those of the leaders and I have proved to myself that I deserve to be on this grid.

I have to also say a special thank you to Rob Allum for all of his help this week, David Fairbrother for his support and the guys from Moody’s who offered me so much encouragement yesterday.

I’m hoping that this performance will give me the confidence to improve even further in the last two meetings of the season, starting at Brands Hatch next”. 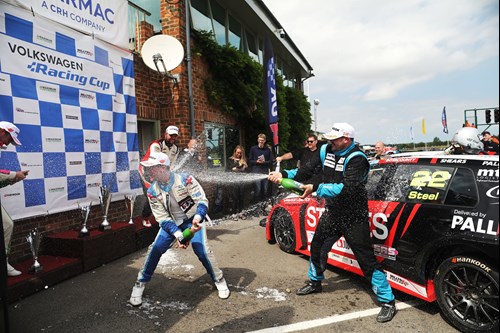 Mark has now strengthened his grip on 11th place in the championship and is hoping to chase down Jack Depper, who is just six points ahead.

You can see watch both of Mark’s races in full on the Volkswagen Racing Cup YouTube channel.

Mark heads to Brands Hatch on the weekend of the 3-4 August, in the penultimate round of the championship.

In the meantime, you can keep up-to-date with all the latest news from the Volkswagen Racing Cup here.