During the off-season, the team spent their time rebuilding and modifying their race bike ensuring it was ready to push on in 2020 following an extremely successful 2019 season.

In addition to this, this season brings with it a fresh new look as new graphics and team kit were also delivered during the break.

With all ONK World Championship events postponed until further notice as a result of the Covid-19 outbreak, the boys jumped at the chance to race in the opening round of the AMCA Championship in Upavon, Wiltshire on Sunday 15th March.

As this was likely to be the final opportunity to compete for some time, the team were eager to give it their very best.

Following recent bad weather, track conditions for the practice session were very slippery, but the boys showed their class and navigated the course in a time good enough to qualify on the front row for the start of the first race.

From the off the team looked to have made a good start, but a collision on the start straight put the boys in a tricky position.

They had to ride hard and use all of their experience to claim fourth place by the time the chequered flag fell. 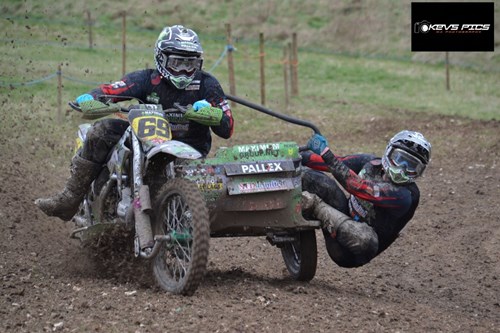 Heavy rain began to fall ahead of Race Two which saw organisers propose the abandonment of the meeting. However, racers never call it a day and all of the competitors pushed to get the rest of the races done.

Soon after, the riders lined up at the start-line and then headed into turn one.

Mac2 entered the corner in fifth position and once again, showed the class that helped make 2019 so successful to charge through the field and claim an impressive second place at the flag.

This achievement was even more impressive because Sam, on the sidecar, was forced to ride for most of the race with no goggles, leaving his face exposed to the endless stream of mud and stones thrown up by the bikes in front.

He suffered a black eye following a direct hit from a stone, but the race result made it worth it. 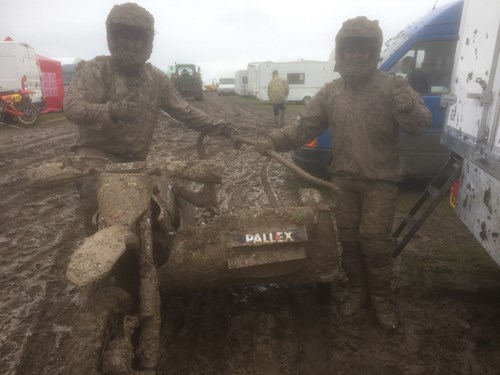 Later, the Pall-Ex sponsored outfit would line up for Race Three, hoping to round off a successful day with a win.

Unfortunately, whilst challenging for third place, reliability issues struck. A stone became jammed in the front brake as they tackled a steep incline.

The result of this was an overheating and the boys were forced to retire from the race.

Overall, the opening round of the AMCA Championship was a good day at the office for Mac2Racing, despite the extreme conditions, with a fourth and a second position in the bank.

Once the team returned to base, it would take three hours to remove the mud.

With no events now scheduled and the fate of the season still to be decided, the machine will need to be fully stripped down to individual pieces, cleaned and then rebuild, ready for storage until it can go racing again when the global situation returns to some sort of normality.

In the meantime, you can keep up to date with the latest from Mac2Racing by clicking here.