DVF Racing go to Brands Hatch in the title fight

The Porsche Carrera Cup GB enters its final round, and DVF Racing remain in contention.

As the Porsche Carrera Cup GB season draws to a close at Brands Hatch on September 29th/30th, DVF Racing, supported by Pall-Ex,  knows it has to be on its game as it heads into the weekend just eight points off the Drivers’ championship lead with Tio Ellinas.

Cypriot Ellinas performed well at Silverstone last time out, missing out on pole position and the two championship points that come with it as rival Dino Zamparelli pipped him by just 0.039s on his final run.

Tio fought back, with a second place in race one and finished second on the road in race two, though he was adjudged to have exceeded track limits and subsequently handed a five-second time penalty which dropped him to fourth place. Refusing to give up, Tio managed to pull clear enough to finish ahead of Zamparelli, clawing back valuable points in the standings and remaining in with a chance of the title.

Looking ahead to the weekend, Tio said; “We’ll see what happens at Brands Hatch. It’s a great place. I had a good weekend on the Grand Prix circuit last year and finished with two podiums, and I did well there earlier in the season and walked away with two second place finishes. We’ve got to be on pole position, and we’ll decide what happens from there on.” 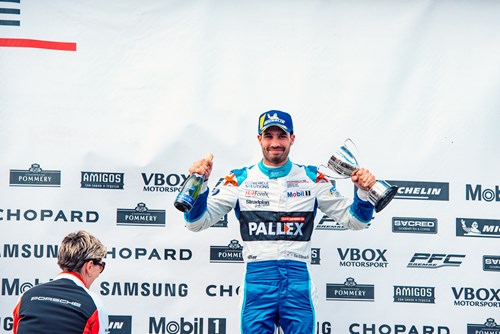 For Am drivers, David Fairbrother, owner of Pall-Ex member ADD Express, and Richard Hawken, the weekend was one of frustration as David was given a hefty ten-second penalty for moving before the start, which scuppered his chances despite running well on the road.

Ahead of the weekend, David said; “We’ll go and try our best at Brands Hatch, see what the craic is. Let’s hope we’ve got our bad luck out of the way now and we can have a strong weekend. We’re all working hard for Tio, and we’ve got to give him the best chance of succeeding and getting the title he’s been aiming for all season.”

Richard looked to be fighting for a podium place but was taken out with contact in both races, also leading to disappointing finishes. Both will be looking to bounce back and close the season on a high at the Kent circuit.

All three DVF Racing cars will be on track for two free practice sessions on Friday, September 28th. Qualifying takes place at 13:35 on Saturday, with both 17-lap races on Sunday, September 30th at 10:40 and 16:20, the latter being broadcast live on ITV4 and online via ITV Hub.