DVF Racing remains in the hunt for its first-ever Porsche Carrera Cup GB title with Tio Ellinas after the penultimate round at Silverstone.

DVF Racing, supported by Pall-Ex, remains in the hunt for its first-ever Porsche Carrera Cup GB title as Tio Ellinas scored a second place in race one and recovered to an important fourth place later on Sunday afternoon, and is just eight points behind championship leader Dino Zamparelli with 24 on offer at Brands Hatch in a fortnight’s time. 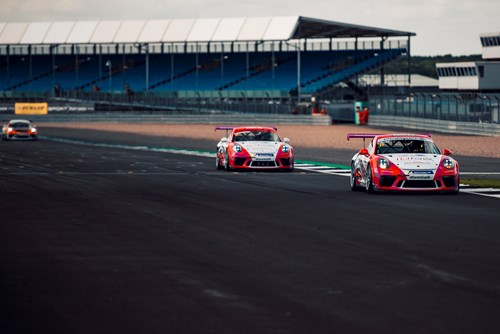 Cypriot Ellinas looked to have secured pole position on Saturday after topping the times towards the end of the qualifying session, but a late flyer by Zamparelli snatched the place by a mere 0.039 of a second. Lining up second on the grid, Tio worked hard in the early stages to fend off a rapid Tom Wrigley, before opening up a gap and taking his 11th podium of the season.

Things looked bright for Tio in race two as he ran third and was challenging George Gamble for second, while Zamparelli was down in sixth, when he was given a five-second time penalty for exceeding track limits. This put him behind his title rival on the timesheets but Tio dug deep and passed Gamble on the road and pulled away. With Zamparelli then slowing on the final lap with a fluid leak, Tio managed to finish ahead and claw back valuable points in the standings.

Tio reflected on the weekend, saying; “It wasn’t a bad weekend to start with. We wanted to be on pole to get those two points, but we didn’t get it, so we started seven points adrift. Dino had a third set of tyres and we didn’t so he had the option of a third run. We were a bit off at the start of race one, Dino checked out, and I couldn’t get any closer, so we lost another two points to him. Race two was good until I got the penalty.

Overall, it’s not the weekend we wanted it to be but we’re going to fight at Brands Hatch."

It was a mixed weekend for DVF Racing teammates David Fairbrother, owner of Pall-Ex member ADD Express, and Richard Hawken in the Am category. David was given a ten second penalty in race one for a false start, costing him a shot at the podium and followed up with fifth place in race two.

David commented; “Tio’s result was good. We’ve got to ride the penalty. My races were consistent, and the times were good. I’m getting back into the swing of things after the layoff. Qualifying was average for me but I’m chipping away all weekend. The penalty was disappointing because you work so hard and the differences around here are so minute that ten seconds is tough."

Richard was running fourth in race one before being taken out and finishing at the back of the order, hampering his chances in race two, where he finished seventh.

All three drivers will be back for the final two races of the season as the team pushes towards the title at Brands Hatch on its legendary Grand Prix circuit on September 29/30.