DVF Racing are still in the title hunt as they head into the penultimate championship round at Silverstone.

As the Porsche Carrera Cup GB heads into its penultimate weekend at Silverstone in Northamptonshire, DVF Racing, supported by Pall-Ex, has its eyes firmly on the championship title. Pro category driver Tio Ellinas sits just five points back from the lead in the standings with 48 points still available.

Cypriot Tio performed well in the rain at Knockhill last time out, securing two podium finishes and keeping rival Dino Zamparelli behind him in the second race of the weekend.

Looking forward to the weekend, Tio said; “Silverstone is a track I enjoy. I was quick there last year: I got ‘Driver of the Weekend’ and was fighting for P1 all the way through, so I hope it is going to be a good one for us again this year and that everything is going to be ok. Hopefully, we can celebrate a race win.”

Richard Hawken, competing in his first year in the Carrera Cup, was on the verge of the Am category podium places on his Knockhill debut and will be hoping to carry that form to a circuit he has had success on in his time racing touring cars. 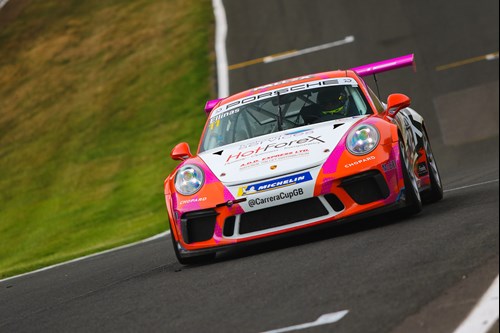 The pair will be re-joined once again by Yorkshireman David Fairbrother as DVF Racing returns to a three-car effort for the final two rounds of the year. Halifax-based David, owner of Pall-Ex member A.D.D Express, finished on the podium twice at Silverstone last season and will be working hard to repeat his performance this time out.

David said; “It will be nice to go back to Silverstone and get behind the wheel of the Porsche again. I had a good time there last year, qualifying second for both races and finishing with two podiums, so it gives us something to aim for and try to beat. It’s also getting to crunch time in the championship, so we have to work hard for Tio and try to get him in position to win the title.”

Teams will head to the Northamptonshire circuit on Wednesday 12th September for an official test before undertaking two free practice sessions on Friday 14th. Qualifying takes place at 13:00 on Saturday, with both 28-lap races on Sunday 16 September at 11:15 and 16:30, the latter being broadcast live on ITV4 and ITV Hub.