Enjoyable weekend for Fairbrother and Morgan in British GT

DVF Racing made a promising debut in the British GT Championship at Donington Park as David Fairbrother, owner of Pall-Ex member ADD Express, made his first start in the series.

DVF Racing made a promising debut in the British GT Championship at Donington Park as David Fairbrother, owner of Pall-Ex member ADD Express, made his first start in the series.

David was racing alongside Pall-Ex backed, multiple British Touring Car Championship race winner Adam Morgan, who made his second appearance some seven years after a one-off drive at Oulton Park.

The pair competed in a brand-new Mercedes-AMG GT4, run by Adam’s BTCC outfit Ciceley Motorsport and were quickly up to speed, qualifying fourth in GT4 Pro-Am after a sterling effort by the touring car star to set the second-fastest time of anyone in his session. 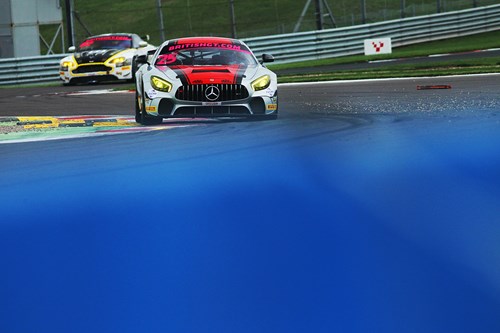 Porsche Carrera Cup GB racer David started the race but was unlucky on lap two as he lost control through the Fogarty Esses and was unable to get the car out of the gravel without assistance. This dropped the car back some six laps from the rest of the GT4 Pro-Am runners and out of contention for a podium finish.

Reflecting on the race, David said; “It was a good day out. I had an excellent start and was getting into my rhythm but going into the chicane, I hit one kerb too hard, bounced onto the other, and spat the car around and into the gravel.

“We lost six laps while in there and from then were on the back foot. It’s a learning curve but if you think that 36 hours before I had never even sat in the car, it is a testament to the Mercedes: it’s a great car to drive” he added.

Despite the setback, both drivers pushed on, with Adam setting lap times comparable to the class leaders and bringing the car across the line seventh in the two-hour contest.

Adam reflected;“It was a really good weekend for us. It was our first time in the car, so we treated it like a bit of a test session to see how we got on.

There were championship battles which we wanted to stay out of; we aimed to get to know the car, see how the weekend worked, and bring it back in one piece. Unfortunately, Dave had a trip to the gravel, but we’ve learned an enormous amount, and we’ve all enjoyed it."

Overall the weekend was a positive experience for the team, with a lot of information and knowledge gathered, while everyone enjoyed the experience.

David explained; “Ciceley has been brilliant. Norman Burgess facilitated getting me in the car, and we’ve had a great time. I think it is something we will do again. Both myself, Adam and the team have done ourselves proud, it’s been a pleasure to be here."

Both Adam and David return to action this weekend as the British Touring Car Championship and Porsche Carrera Cup GB reach their climax at Brands Hatch in Kent.