Pall-Ex supported racer Adam Morgan has started the 2019 Kwik Fit British Touring Car Championship (BTCC) with a series of strong performances at the opening round.

Finishing 3rd, 5th and 11th in the three races at Brands Hatch in Kent, the Lancastrian racer now sits fifth in the overall championship, and third in the Independents championship.

Following a difficult qualifying day on Saturday, Adam started Race One in 22nd place on a damp and foggy Sunday morning.

While most of the field opted for wet tyres, Adam and the Ciceley Motorsport team did not have much to lose, gambled on slick tyres, that are best suited to drier conditions.

At the start of the 24-lap race, the Pall-Ex supported driver struggled for grip, as the tyres refused to heat up in the damp conditions.

However, as the track dried, the tyres came to life and Adam was able to pick off the cars ahead, as their wet tyres overheated and lost performance, eventually crossing the line in a magnificent 5th place.

The fantastic drive in Race One earned Morgan a 5th place start for Race Two.

From here, he joined the battle for the lead as the race progressed.

The race was punctuated by the intense battle between Adam in his Mercedes A-Class and Ash Sutton in the Subaru Levorg.

The Ciceley driver was all over the back of Sutton for most of the race, and coming out of the final corner, he made a last minute attempt to take second place, losing out on the line by just 22-thousandths of a second.

Nevertheless, to finish third in Race Two after the qualifying result of Saturday was a great achievement. 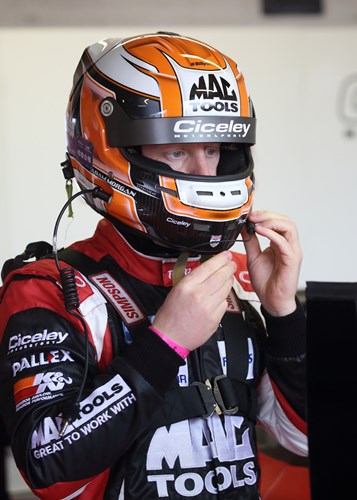 Race Three featured the reverse grid, which saw Adam start in ninth position for the final race of the day.

As always, Race Three was a full-on affair, with close battles throughout the field, as drivers threw caution to the wind.

Adam was locked in a race-long battle with Tom Ingram in his Toyota Corolla, with plenty of contact being made.

After the race, Adam said: “That was the most physical BTCC race I’ve ever been in.”

“I couldn’t get past some very defensive drivers and I got bottled up behind Tom Ingram and everyone fired into me! I got hit so hard, I was pushed into Tom and that did some damage, I think to the radiator because the temperatures went up on the last lap - I was lucky to get to the end of the race.”

Overall, the weekend was a great success, as Adam and the Ciceley team showed their strength and pace that looks set to develop throughout the 2019 season.

The next round of the BTCC will take place at Donnington Park between 27th and 28th April, and Adam will be hoping to repeat last year’s victory at the East Midlands circuit.