Adam Morgan raced to his third victory of the season at Rockingham Motor Speedway.

Adam took his first ever pole position in Saturday’s 30-minute qualifying session, the Mac Tools with Ciceley Motorsport Mercedes-Benz A-Class gaining a tow to help with the time but it was a mighty effort from Adam and the team after two frustrating race weekends.

“It’s been six years, but we got there,” smiled Adam after qualifying. “This pole position feels like a win and bearing in mind that we normally race better than we qualify, this puts us in a great position going into race one.”

Adam made a superb start to the opening 16-lap race and shot towards Turn 1 ahead of the pack. Behind him, chaos reigned as Dan Cammish clattered into Sam Tordoff and the Honda turned the Ford around with others piling into the melee. That allowed Adam to break away, in his Fuchs Lubricants backed Mercedes and build a lead after the race resumed on completion of a safety car period.

Adam controlled the pace and started to build an advantage over Tom Chilton, whose Ford Focus was busy defending from Ash Sutton (Subaru Levorg). As the two squabbled, they delayed each other and allowed 'The Morganator' to break away, and even though Sutton grabbed second spot, he was too far back to challenge Morgan. Adam ran out the winner to add to his successes at Donington and Thruxton.

“It’s always good to do a lights-to-flag victory,” said Adam.

I made a great start, and I knew if I led out of the Deene Hairpin I would be OK. I led in, and when I came out I looked in the mirror and saw there had been drama, so I just got my head down and pushed on. After about five laps it became a bit slippery, and then it dried up, so I just concentrated on maintaining the gap.”

For race two, Adam carried the maximum success ballast: 75 kilos. That was always going to hamper his pace but, starting from pole position, Adam made a good start but was beaten off the line by the quick-starting rear-wheel-drive Subaru. Adam slotted in behind and chased hard, but the lighter car of the reigning champion had the edge for the win with Adam taking an excellent second place and an Independents win together with another big haul of points.

“I knew Ash would be strong off the line; I just had to do my best with the weight. There were battles behind me, so I could build a gap over the pack and thankfully the flag dropped before Tom Ingram (Toyota Avensis) could catch me. With 75 kilos, second place was a great result.” 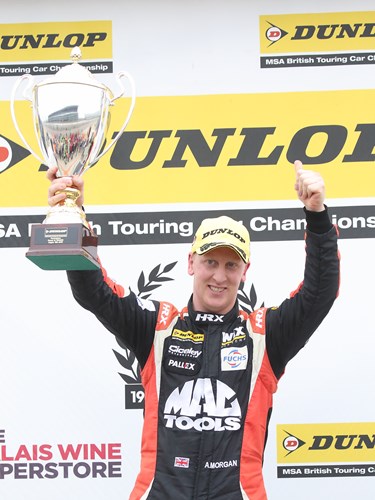 Adam would start ninth on the semi-reversed grid for the final race, with Adam carrying 66 kilos of success ballast, so he once again had a heavy car. From row five, Adam made a great start and charged through drama at the first hairpin to gain ground and emerge in third place. As Adam chased the leaders, on a greasy track, he made a small mistake at Yentwood and slithered wide a few laps later, allowing the lighter cars to come by. That left Adam in a race-long duel with Ollie Jackson’s Audi S3. The two cars scrapped for the bulk of the race, chased by Dan Cammish’s Honda, but the slippery-shaped Volkswagen CC (also a ballast-free car) was able to jump ahead, relegating Adam to eighth place.

“A win and a second is a great effort for the weekend,” said Adam. “For the last race we ran the championship regulation hard tyre, and our pace was steady but not great. We have had two frustrating weekends, so to come here and rack up the successes is a real boost to us all. We came here ninth in the championship and are now up to sixth. I have had more wins than all bar one driver, so there is a lot to be pleased about.”

Adam’s efforts over the weekend netted Mac Tools with Ciceley Motorsport the Teams’ Trophy for the weekend with the most consistent trio of results, the first time the team has scooped the award.

Ciceley Motorsport’s Commercial Director Norman Burgess said: “What a weekend! Adam has excelled himself this weekend, starting with that first-ever pole position. That was a great start to the weekend, and a race win, a second, two Independent wins and then the Teams’ Trophy success has been outstanding. We know how competitive this series is, and you can’t always have a good weekend. We have had some lows in recent races, so it was superb to come here and fight back. Our Mac Tools guests enjoyed some knife edge racing and seeing their car at the front in two races was excellent. Adam has proved he is a fighter: he dug deep this weekend, and that determination was rewarded. Now we go to Knockhill and look for more success.”

The next rounds of the Dunlop MSA British Touring Car Championship will be at Knockhill, Dunfermline, on August 25/26 and all the action will be shown live on ITV4.