Adam Morgan claimed his first victory since 2018 in a dramatic final race at Oulton Park on Sunday.

Adam Morgan claimed his first victory since 2018 in a dramatic final race at Oulton Park on Sunday, during Round Three of the Kwik Fit British Touring Car Championship (BTCC). 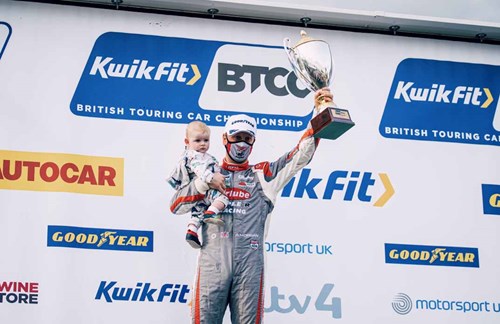 The Pall-Ex backed racer claimed the race lead into turn one having started in second position in the final race of the day, thanks to the reverse grid draw in his Carlube TripleR Racing with Mac Tools Mercedes.

From the outset, Adam was under pressure from the fast BMW of Tom Oliphant who was in the hunt for his second career victory, having taken his first win in the BTCC last time out at Brands Hatch.

Adam extracted every ounce of performance from his Ciceley Motorsport-run Mercedes-Benz A-Class to keep Oliphant behind him.

Wet conditions, earlier in the day, meant that any moves off the racing line put the car onto a very slippery surface, so Adam had to display extreme precision throughout the race to hold on to his position.

After the first seven laps, Oliphant moved aside to allow team-mate and current  BTCC champion Colin Turkington take a run at Adam.

Once again, Adam displayed immense skill to hold of Turkington who was pushing hard to find a way through.

As the race headed towards the final third, a train of four rear-wheel-drive cars lined up behind the Ciceley man but were unable to pass.

As Adam’s defences continued to be tested, a late multi-car incident caused extensive damage to one of the crash barriers, bringing out the red flag.

This neutralised proceedings and the decision was taken to end the race with over 70% of the original distance complete, meaning Adam took the victory!

After climbing out of the car, Adam commented; “I just felt in the zone from the moment I put my helmet on.

“I felt really confident and made the best start I’ve ever made.

“It was tough keeping Tom behind me but it is a difficult track to overtake at and so it was a case of holding the BMWs up at places at which they were stronger, and backing them up when I could.

“Could I have kept them behind for another four laps? Who knows but I’m overjoyed with the win.

“Once I saw Tom had let Colin through, I realised that Colin would go for championship points so I didn’t have to defend quite as doggedly and he would be cautious.

“That was in my mind, but rear-wheel-drive cars are good and as my tyres went off, he became more of a threat.”

The win was a huge achievement for Adam and the Ciceley team, after a challenging two seasons and he was visibly emotional during the post-race interview with ITV4.

He said; “It seems like a long time since the last win and last year was very tough. To win in British Touring Cars is special!

“Last year was a long year and we are back where we belong and to have Freddie, my six-month-old son here, is very special indeed.

I was very emotional on the in-lap, and that is not like me at all. It is a reflection of the hard work everyone has put in and this I hope is the first of many wins this year.”

The win in Race Three topped off another strong weekend for Adam and the team.

Having qualified in ninth on Saturday, Adam battled hard in Race One to claim seventh position.

In Race Two, Adam once again fought hard at the heart of the pack, coming home with another solid ninth-place finish.

The results see Adam move into seventh place in the overall Drivers’ Championship and third in the Independent Drivers’ championship.

After such a positive weekend, the team will be looking to continue with this momentum heading into the next round at Knockhill this weekend.

The Scottish circuit always produces exciting racing so Adam has every chance of capitalising further.

Qualifying will take place on Saturday 29th August and will be shown live on ITV.com.

In the mean-time, you can keep up-to-date with all the latest from the Adam Morgan and Ciceley Motorsport team and the BTCC on Twitter via the following links;