Adam Morgan enjoyed a fantastic weekend at Thruxton, as he claimed three podiums at the Hampshire circuit.

The Pall-Ex backed racer has struggled with reliability and bad luck so far this season, but this was all forgotten as Adam took to the track on Saturday as Round Seven of the Kwik Fit British Touring Car Championship (BTCC).

A change of engineering personnel was triggered prior to Thruxton and the transformation in the car’s performance was immediate.

Enjoying solid pace in both Free Practice sessions on Saturday morning, finishing fifth and third, the Lancastrian entered qualifying later that day full of confidence in the car and himself.

In the 30 minute session, Adam gave it everything, and navigated the fast-flowing 2.36-mile track in his Ciceley Motorsport Mercedes Benz A-Class in a time of 1:15.99, averaging a speed of 111.6 MPH. 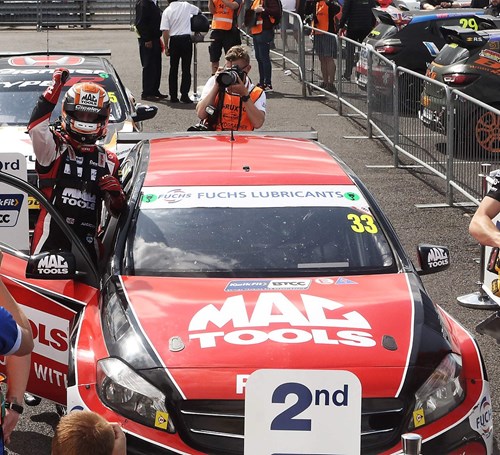 This excellent performance was good enough for fourth place on the grid for Race One on Sunday, his best stating position of the season and was just 0.119 seconds off the pole time of Sam Tordoff.

“Thank heavens for that!” joked Adam after the session. “Straight away, the car felt different. It is so much easier to drive and that in turn gives you more confidence.

We needed to know where the root of the problem was and we felt fresh eyes would be a good way of starting that process, so whilst we thank Marco Calovolo and the Hexathron Racing Systems guys for all their hard work, we felt we needed a fresh start and we think it is the right decision.”

On Sunday, the whole team arrived in the garage, excited to see if Adam could capitalise on his great starting position, ahead of the congested midfield.

In recent races, starting further down the grid has meant Adam has found himself caught up in midfield scraps far too often that have seen him suffer damage before his race has got going.

As the lights went out for Race One at 12:25 on Sunday, Adam made a good start and pulled alongside Dan Cammish’s Honda Civic Type-R.

For a while, it looked as though Adam’s Mercedes would have the legs to pull beyond the Honda, but the long fast right-hander of turn one, followed by the tighter right-hander of turn two, left Adam on the outside of Cammish, and he was forced to hold position in fourth.

The man who started in second, BTCC veteran Jason Plato, would go on to be handed a drive-through penalty for starting out of position, which elevated Adam into third.

From here, Adam remained locked in a battle with the two Hondas of Tordoff and Cammish for the whole race, but was unfortunately unable to pass them.

Adam brought the car home in third place to claim a very well deserved second podium of the season and vital points in the championship.

Elated after the result, Adam described his race; saying, “It was brilliant!

“I made a good start and got alongside Cammish and then looked after the tyres for the first few laps. By defending from Josh, I was always having to keep an eye on what he was up to rather than purely attacking Dan, but a podium is a huge boost for us all and the car just felt great. I’m really looking forward to Race Two now!”

After lunch, Adam would line up in third for Race Two, hoping to go even better than he had in Race One.

Off the line, Adam took advantage of a slow-starting Dan Cammish and he took second place behind Sam Tordoff, whilst fending off the fast-starting BMW of Tom Oliphant.

From here, Adam was closely followed by Josh Cook in his Honda Civic Type-R, and the pair quickly chased down Race One winner, Tordoff.

On lap four, Adam and Josh Cook had caught up with Tordoff’s Honda and were all over his rear bumper.

Heading into Church, the fastest corner in the country, Adam placed his Mercedes down the inside of Tordoff, and secured what he thought was first place.

However, Josh Cook somehow managed to go around the outside of Tordoff slid just in-front of the Pall-Ex supported man to take first position.

Adam battled hard for the remainder of the 16 lap race, but was unable to overcome the pacey Cook, finishing just 1.9 seconds behind.

This performance was even more remarkable considering Adam was nursing a damaged clutch throughout the race.

The second place and a second podium of the day gave the Blackburn based team even more reason to celebrate.

After the race, Adam reflected on what was his best finish of the season; “Maybe there was a bit left in me, but I just want good finishes and points this weekend, so another podium is brilliant.

People have written us off this year and said the car is too old, but we’ve proved it is still a podium finisher.”

Ahead of the final race, the Ciceley Motorsport mechanics worked tirelessly to change the engine in Adam’s car, for the second time this season, as a result of the clutch issue suffered in Race Two.

With his car ready for the final race of the day, Adam was hoping to cap a fantastic weekend with a win, but starting from fifth place due to the reveres grid start, this would be a tough challenge.

Once the lights went out, Adam bogged down slightly as he pulled away and Andrew Jordan’s BMW was able to pull past him.

The Ciceley Motorsport driver was soon up to full speed though and managed to fight with the cars around him to reclaim fifth place soon after.

For the remainder of the race, Adam put in good lap times and was able to climb to fourth place in the final laps, as heavy rain suddenly hit the track making conditions very slippery.

Despite finishing outside the top three, Adam’s efforts won him the Independents’ category in the final race of the day, which once again saw him stand on the podium, making it a full house for the day!

After the race, and what had been the team’s best weekend so far this season, with Daniel Rowbottom in the sister Cataclean Mercedes Benz A-Class scoring his best finish of the season in 14th, Adam reflected; “It’s been an incredible weekend. The car fells so different, much easier to drive, more confidence-inspiring and we have had pace that we haven’t enjoyed all season. Paul Ridgway and Steve Farrell have got the car working as it should do and I have been able to race, not just sit in traffic.

The car had great pace in race three against lighter cars and we’ve done so little to the car all weekend, just the occasional camber change, because it has worked. We’re back”

Adam and the team have demonstrated their outright pace and talent at Thruxton, and proved that they are real front runners, when bad luck doesn’t hinder their weekend.

The efforts across the weekend secured the second-best weekend in terms of points and results in the team’s history.

Everyone at Ciceley will be hoping this is the catalyst for great run of results as the final few rounds of the season approach.

The next round of the BTCC takes place at Knockhill in Scotland on the weekend of the 14-15th  September.

As always you can watch all of the races live on ITV4 Sunday 15th  September, with the programme start time yet to be announced. You can keep up to date with this here.