Dunlop MSA British Touring Car Championship racer Adam Morgan enjoyed a positive weekend at Silverstone, Northamptonshire, on Sunday as he took a second place finish as his best result of the weekend. Adam also moved into joint fourth in the championship and third in the Independents’ competition.

Adam’s weekend started on the back foot as his Mac Tools with Ciceley Motorsport Mercedes-Benz A-Class, supported by Pall-Ex, struggled in free practice as the team worked on set-up with a view to the qualifying session. As the team explored different tweaks, the car made progress and come qualifying, was a very competitive proposition. Adam battled to ninth fastest with 27 kilos of success ballast on board for his seventh place in the championship. Adam was just two-tenths of a second off pole position around the 1.6-mile circuit. “The car was much improved for qualifying,” Adam explained. “We worked hard on the set-up of the car and I think there might have been a bit more time in me. The aim now is to push and gain points and places.

Adam made a good start to the opening race and battled his way up to sixth place, the Mac Tools-backed Mercedes-Benz A-Class used its braking and cornering abilities to make up for its lack of straight line speed, an effect of the car’s boxy shape. That top six place, coupled with problems for some of his rivals, allowed Adam to take a solid haul of points after an early battle with the sister car of Aiden Moffat.

From sixth on the grid in race two, Adam made even better progress. He was up to fifth by the end of lap two and then set off in pursuit of the leading pack, hustling the Mercedes-Benz A-Class into the top three and then passing race one winner Sam Tordoff whose Ford Focus was laden with 75 kilos of success ballast against the 33 kilos of the Mercedes. Adam nipped ahead on lap 14 of 22, but the ballast-free Toyota of Tom Ingram was too far up the road. Adam’s second place was a welcome one after a troubled start to the weekend, moving him to third in the championship.

However, the BTCC regulations stipulate drivers use an option tyre once in one of the three races over a weekend and Adam had elected to use the harder compound in race three. The aim of the option tyre is to spice up the races and shuffle the order. The tyre never works as well as the prime tyre: it is the slower of the two, deliberately. Adam struggled for pace with the harder tyre and finished 17th.

“We suffered with the hard tyre” said Adam. “On the primes it felt really good but it doesn’t go as well on the harder tyre and everyone was in the same boat, but I also got hit by Mike Bushell (Volkswagen CC) and that didn’t help. However, we have ended the day up to fifth in the championship and to do that at a circuit that doesn’t suit our car, we are really pleased.” 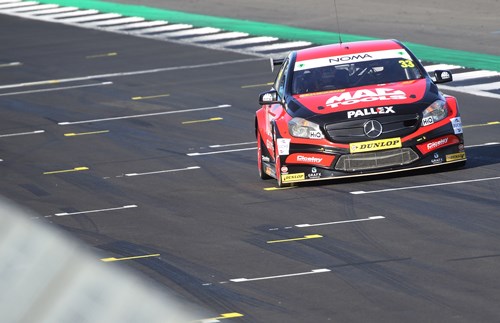 Ciceley Motorsport’s Commercial Director Norman Burgess said: “It has been a really positive weekend for us and for the team as a whole with all three Ciceley-built Mercedes-Benz A-Classes going well. Adam’s pace in races one and two were excellent given that this is a circuit where you need a slippery-shaped car and ours is a bit boxier than others. To gain a sixth and a second was fantastic. The harder tyre showed what an effect it can have and it is a shame that Adam missed out on points in the third race. All our Mac Tools guests were thrilled to see Adam move up to third in the championship after race two and although we go to Brands Hatch joint fourth, third is our realistic target. We’re aiming for second in the Independents’ Championship too, so we need a good result next weekend.”

The final rounds of the Dunlop MSA British Touring Car Championship will be at Brands Hatch, Kent on September 29/30 and all the race day action will be shown live on ITV4.