Adam Morgan has rounded out a tough season with a challenging final weekend at Brands Hatch that saw him come from the back of the grid to claim a great top ten finish.

The Pall-Ex backed driver has seemed to attract misfortune this year in the Kwik Fit British Touring Car Championship (BTCC), encountering mechanical issues and on track incidents throughout the season, through no fault of his own.

The weekend at Brands Hatch was no different.

This was encouraging heading into the next session, Qualifying.

Ahead of the session, rain began to fall, making conditions challenging for the whole field.

Here, Adam continued his strong pace from the earlier practice sessions, clocking the fastest times for the first two sectors of anyone.

Once the red flag was withdrawn and the session restarted, Adam had lost temperature in his tyres and struggled to get back up to speed.

Despite this, Adam was able to negotiate the 2.43 mile circuit in a time good enough for 11th position, meaning a solid starting position for Race One on Sunday.

After the tricky session Adam reflected on his performance, saying; “I’m frustrated not to be a bit higher up and those red flags did me no favours, but compared to where we have been in the past in wet conditions I am pleased because we have taken a noticeable step forward.

The car felt nice and calm so it was really good to drive. If the weather dries tomorrow, we can do something I reckon.” 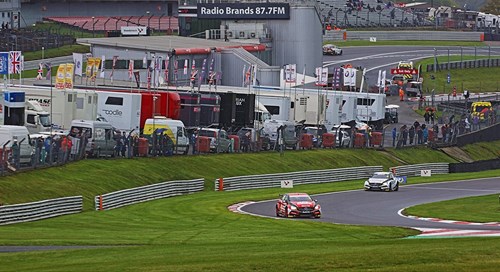 A damp Sunday morning came with the whole team eager to end the season on a high.

Adam lined up in 11th position on the grid for Race One, targeting places well within the top 10.

Having made up some places in the opening laps, Adam’s medium tyres began to lose temperature and this caused him to slide wide in Turn Three, allowing a number of cars to slide past him.

One of these cars was Matt Neal’s Honda Civic.

As the veteran driver pushed past, he leant on Adam’s Mercedes and this forced Adam to run wide over the kerb. A detour that saw him drop to 27th place.

Soon after, rain began to fall and a safety car, triggered by Matt Simpson’s Honda that went off at Paddock Hill Bend, added yet another element of unpredictability to the unfolding race.

Adam and Daniel Rowbottom, in the sister Ciceley Motorsport car, made the decision to switch to wet tyres during the safety car period and were able to re-join the pack quickly, thanks to the great work of the mechanics.

Although near the rear of the pack,  Adam was now on the right tyres for the conditions and he drove expertly to climb back up to 19th position.

After the race, he commented; “It was the right call and I think if we had done it a lap earlier it would have been even better, but the problem wasn’t the decision to pit, it was the stuck wheel pin.

The guys tried to be quick and methodical to sort the problem out but it was so frustrating sitting there losing time.” 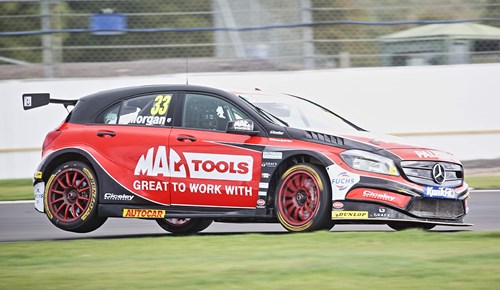 Adam would line up in 19th position for Race Two.

Unfortunately, as can happen when starting lower down the order, Adam was caught up in a Lap one incident meaning that he suffered considerable damage when he T-boned the Volkswagen of Jack Goff and he was unable to show his true pace.

The Lancastrian ended up in a disappointing 26th place when the chequered flag fell.

With nothing to lose in what was the final race of the day and the season, Adam went into Race Three all guns blazing.

For the first time on Sunday, the rain stayed away and Adam lined-up towards the back of the gird in 26th place.

From here Adam powered his way through the field on one final charge for the 2019 BTCC season.

In a fantastic display of car control, determination and race-craft, Adam managed to propel himself and his Mercedes-Benz A-Class to a stunning ninth position by the time the 15 lap race reached its conclusion.

This expert drive ensured that the season ended on a high for the Ciceley team.

After the race, Adam reflected on his performance in the race and throughout the season as a whole “That was a good way to end the season,” said Adam. “The car felt nice, there was no damage and the speed of the car was a great way to repay the team and our sponsors.

We have certainly turned a corner since the middle of the season and bringing Steve on board, along with Paul Ridgeway’s input, has been a great help and this has helped to bring my confidence back.

I can’t help but wonder what might have been had we had the car we have now in the first part of the season, but we have to be proud of how we have battled to get back to being front-runners. We’ll come back fighting next season!

However, Adam’s excellent driving over the season was rewarded as he won the Dunlop #ForeverForward award, for making the most overtakes during the season. A staggering 129 overtakes in just 30 races.

This means he made up over four places per race on average. 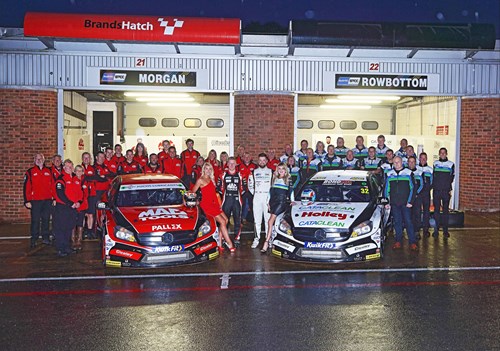 One of the team’s most difficult season’s since entering the BTCC, Ciceley end the 2019 season in a fantastic fifth position in the Independent Constructors Championship.

Heading into the off-season, eyes have already turned to next season, where everyone will be hoping for better fortunes and a real title challenge in 2020.

The BTCC may have come to an end for the year, but you can still keep up to date with Adam, the Ciceley Motorsport Team and the BTCC by clicking on the links below;