Adam Morgan endured yet another tough weekend in the Kwik Fit British Touring Car Championship (BTCC), suffering race-ending damage in Race One at Oulton Park, only to battle back to claim 10th place in the final race of the day.

As the temperatures soared on Saturday, Adam and the Ciceley Motorsport team’s optimism rose as the Lancastrian aimed for a much improved qualifying from the previous session at Croft two weeks earlier.

Adam navigated the picturesque Cheshire circuit in his A-Class Mercedes-Benz in a time of 1:26:542, securing him 12th position. However, as a result of a grid penalty for Chris Smiley, Adam was promoted to 11th place on the grid for Race One on Sunday morning.

After the session, Adam commented; “It’s nice to be back near the front after an awful session last time, so this is a relief. It was a decent lap time and it puts us in the mix for the opening race.”

In Race One, Adam fought well and managed to climb two places, up into ninth place. Unfortunately, a charging Ash Sutton in his Subaru Levorg GT misjudged a late lunge and collected the left rear of Adam’s Mercedes.

The resulting damage was significant. With a left-rear puncture and broken suspension, Adam was unable to continue and became a spectator for the remainder of the 18 lap race, and the team would have to work tirelessly to repair his car for Race Two.

Adam commented: “I’m really frustrated about that. Ash was quicker and I was about to let him by because there was no point risking damage and then he tried a surprise move at Cascades and misjudged it.

He swung out from behind but didn’t clear my car so he whacked the left rear corner and put me out. That means I’m at the back for race two and the day is looking difficult.” 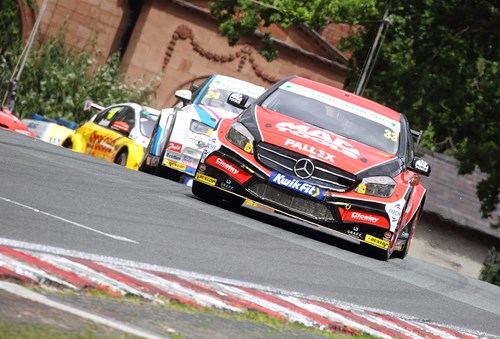 In Race Two, Adam had some serious work to do if he was to salvage any championship points, starting from a lowly 28th place on the grid.

Never afraid of a challenge though, Adam got his head down and focussed on making up as many places as possible.

He drove brilliantly, showcasing his racing instincts to climb to 19th position as the chequered flag fell.

Reflecting on his race, Adam said: “The car felt ok, but it seemed to match the pace of the cars around me rather than being faster than them so making progress was tough.

The car wasn’t discernibly quicker than the others so I did my best and dragged it up to midfield but it was another tough race. We ran the option, soft, tyre in that race and maybe as it fell away so did my pace but I made the best out of what I had.”

The Ciceley Motorsport team worked hard once again to undertake running repairs and minor set-up changes to best prepare Adam’s car for the final race of the day.

From 19th place on the grid, Adam once again went into full attack mode, making daring overtakes around a circuit that is traditionally not known for providing many opportunities to do so.

His experience and race-craft were tested to great extremes, but he was able to make his way through the pack, making it into 10th position as he crossed the line, securing six championship points.

After getting out of the car, Adam explained: “That was another tough race. “There was an incident early on that put some oil down on a big section of the circuit and made overtaking impossible there.

I gained some places by bravery and others through other people making errors, but I can’t help but feel that this was a weekend that got away from us through no fault of our own."

We could have had three top 10 finishes but the crash with Ash in race one changed our whole day. He got a grid penalty for that but it doesn’t help us. Our 10th in Race Three proves that the car is still competitive and that I can overtake and race hard, but I shouldn’t have had to spend races two and three fighting back.

Still, we take the positives out of today and regroup for Snetterton in August.”

The BTCC now takes an extended break, with no action during July.

The next round takes place at Snetterton in Norfolk on the weekend of the 3-4 August and Adam and the team will be hoping for more luck at the East Anglia circuit, following a torrid run of misfortune for most of the first half of the season.

As always you can watch all of the races live on ITV4 from 11 AM on Sunday 4th August.