With heavy rain falling for the majority of the day, the twisty Scottish circuit was awash for the three 24-lap races with the rain and spray causing visibility problems for the drivers. Despite the awful conditions, Adam bagged a ninth, a fifth and a fourth place finish across the three races.

Adam’s Mac Tools with Ciceley Motorsport Mercedes-Benz A-Class, supported by Pall-Ex, started its weekend well as the team worked on set-up through the two free practice sessions and went into a dry qualifying session with optimism. With 31 cars on the 1.29-mile circuit, finding a clean lap was crucial, and the session was stopped almost as soon as it began as a rival car dumped oil all over the road. That meant a lengthy clear-up operation and a slippery surface when the session resumed, but Adam mastered the conditions to put in a solid banker lap. With a new set of tyres, his pace looked good on his second qualifying run, but Adam didn’t improve his lap time, feeling that he was perhaps overdriving at one section of the circuit. Ninth was his reward.

Race day dawned grey;  the rain was relentless. On a treacherous track, Adam slotted into the pack and, barely able to see anything, admitted to making a couple of mistakes as he battled to keep his Mac Tools-backed Mercedes, running with 27 kilos of success ballast, on the track.

“It was so difficult to see,” explained Adam.

It was a case of surviving as you had to judge where to brake off the lights of the car ahead and trying not to make a mistake was really tough. There was standing water at the Hairpin and not much grip, so I am pleased to have made it home without damage. The car felt good considering the conditions.”

Adam was ninth for the second time that weekend and he lined up on the inside of row five of the race two grid with the weather now even worse. As the cars slithered away from the line, Adam struggled for traction and lost a couple of places to his rivals, but was soon on the attack and soon battled his way up into seventh place.

Adam Morgan “The car felt better in race two because we had taken some of the weight out of it, so we had just 15 kilos, but the conditions were terrible. It was more about surviving than racing, to get through  and gain more points.”

Better news was to come, as the first two finishers were subsequently excluded for technical infringements, elevating Adam to fifth place and winner of the Independents trophy ready for the third race, and the semi-reverse grid draw placed him on the front row of the grid. 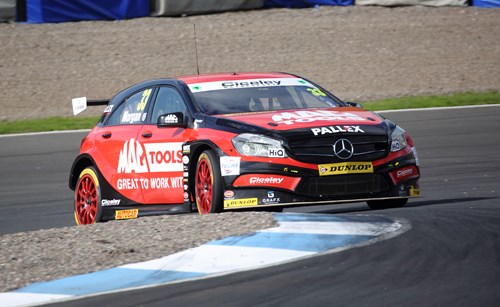 There was no let-up in the weather, however, as the circuit was still wet for race three, with Adam making a good getaway to slot into second place behind race leader Tom Chilton. As the leading Ford Focus extended its advantage, Adam felt that his tyre pressures might not have been perfect, as he soon had to start defending from the advancing pack behind. Adam defended as best he could, but dropped to fourth place to ensure banked points, rather than become involved in any late-race incidents.

“I am disappointed not to have taken a podium in race three, but to come away with a ninth, fifth and fourth is really good, especially in this weather. It has been horrendous but the car has worked well on the whole, and we go next to two circuits (Silverstone and Brands Hatch) where traditionally the car works better. So, on the whole, I am happy and it has been a good weekend for points, and we will keep fighting in the remaining six races.”

Ciceley Motorsport Commercial director Norman Burgess said: “Adam has driven magnificently this weekend in probably the worst conditions we have endured for a long, long time in the BTCC. All our Mac Tools guests were impressed with his racecraft in the wet: hardly any grip and little visibility made life so hard for any driver, but Adam wasn’t afraid to overtake and to defend when he needed to, so three top 10 points scores is a positive weekend for us all.

The next rounds of the Dunlop MSA British Touring Car Championship will be at Silverstone, Northamptonshire on September 15/16 and all the race day action will be shown live on ITV4.