The Ciceley Motorsport driver, racing in the Kwik Fit British Touring Car Championship (BTCC) achieved a fourth podium from the last six races at the Fife circuit on Sunday.

On Saturday, Adam managed to put in a solid run in during a disjointed qualifying session and was able to claim an impressive eighth place on the grid for Race One on Sunday.

After the session, he commented; “We’d planned to do two qualifying runs on new tyres, but then a red flag came and I thought we’d better have another go, just in case the others were able to find any extra speed.

It was a good job that I did do another lap as the rest did go quicker, and I improved a little. I reckon that there might have been another tenth of a second in me, but eighth puts us in a good position for the first race.”

Sunday brought race day, and Adam and the team were raring to build on Saturday’s pace.

An early safety car following a crash bunched up the field meaning Adam was in a prime position to attack those in front when the restart came. 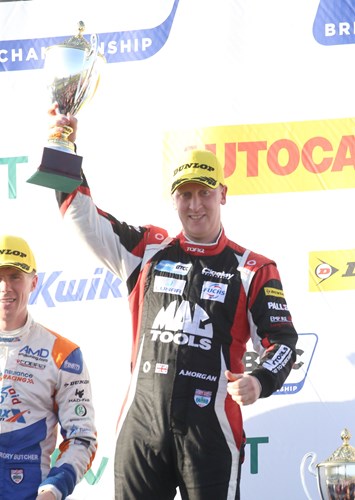 Ingram sent a late lunge down the inside of The Hairpin that Adam had to avoid in order to prevent any damage.

Thinking of the long game, Adam took ninth place rather than incur any serious damage.

After the race, Adam said; “We made some subtle changes to the car after qualifying and we were perhaps just one per cent too conservative.

That said, my pace was better at the end of the race than that of some of the others so we just need to get that balance of aggressive and conservative set-ups spot on. We are not far off.”

Starting in ninth for Race Two of the day on the slower Option tyre, the Lancastrian had his sights set on places further up the order.

The Pall-Ex backed man took everything he could from the tyres, but once they began to fall off, so did his performance.

Nevertheless, by racing hard, and demonstrating his skill, Adam battled for the two places in front of him and crossed the line in seventh.

Following yet another solid performance, Adam commented; “It is just so nice to be back at the sharp end of the grid. After such a difficult start to the season, I am so pleased to be racing at the front once more and away from all the midfield risks and damage.

The car felt strong at the start of the race, but I may have pushed a bit too hard early on which hurt the rubber slightly. I struggled a little at the end of the race so I had to defend from Jason Plato, but I managed to hang on. Another top 10 is good though: it shows that we’re back.”

The Ciceley Motorsport team, as always, worked hard to get the Mercedes-Benz A-Class set up for the final race of the day in Scotland.

Adam lined up in fourth position for Race Three, thanks to the reverse grid.

As the lights went out, he made a blazing start, and looked set to take third place from Jason Plato.

Once again, a safety car was deployed to neutralise the race whilst victims of first lap drama were cleared and Adam had to hold station.

Determined to make it onto the podium once again, Adam set about Plato’s Vauxhall Astra once the race had restarted.

At the end of Lap 13 he took his chance as Plato suffered with wheel spin on the exit of The Hairpin.

Adam pulled alongside the BTCC veteran and took the place into the first corner on Lap 14.

From here, Adam tried to chase down the front two, but he also had to be aware of the charging Chris Smiley, who was making good progress behind.

Eventually, the Mercedes crossed the line in third, sealing yet another great weekend with a podium finish.

Following the podium celebrations and media activities, Adam reflected on yet another positive day of racing, commenting; “I had a good fight with Jason and was able to get him going down Duffus Dip. That was a bit hairy but I got away with it! Maybe if I had got ahead sooner, I could have taken second place but although I caught Josh Cook (Honda Civic) for second, I just didn’t quite have enough in the car to mount a proper attack.

Third, though, is another really good result and an indication that the Mercedes-Benz A-Class is far from a spent force. The car has been great all weekend and we have hardly needed to change a thing. It’s a real credit to everyone in the team.”

Adam leaves Scotland having moved from 14th to 12th in the overall championship standings, and sixth in the Independents Championship.

Hoping their fantastic run of form continues, Adam and the Ciceley Motorsport team be in action as the BTCC rolls into Silverstone for its penultimate round between 28-29th September

As always you can watch all of the races live on ITV4 Sunday 29th September, with the programme start time yet to be announced. You can keep up to date with this here.