Following his win last time out at Oulton Park, Adam was hoping to replicate his form just a week earlier and his pace in the two practice sessions suggested another strong performance was on the cards.

However, a qualifying session disrupted by a red flag saw Adam unable to break into the top 10.

The Ciceley Motorsport racer only managed to clock the 14th fastest time in his Mercedes-Benz A-Class as other drivers managed to find pace in the dying seconds of the session.

After the session, a frustrated Adam commented; “That was just one of those things.

We thought we had read the session just right and no-one was improving so we elected to save rubber, but suddenly the session came alive at the end and we just weren’t in the right place to respond.”

Heading into the first race, on Sunday, the team were hopeful that they could gain places from the start and collect a good points haul, making up for the disappointment of qualifying just 24 hours earlier. 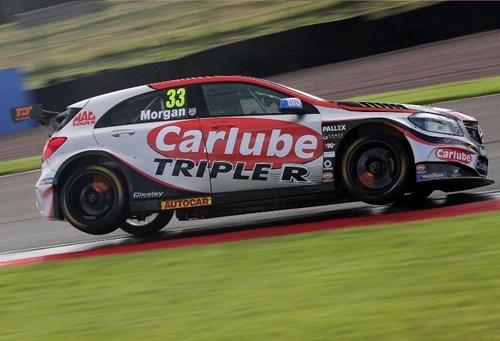 Knockhill circuit in the Kingdom of Fife always produces spectacular racing with cars spending almost as much time on two wheels as four during the lap, thanks to its fast, undulating layout.

After a reasonable start, Adam found himself at the heart of the midfield, where he became locked in a battle with BTC Racing’s Josh Cook.

Whilst battling with Cook, Adam left the door open to the other BTC Racing driver Tom Chilton who slipped through.

Towards the end of the race, Cook suffered a puncture which promoted Adam to 12th position, which on balance seemed to reflect the car’s pace.

Once he returned to the paddock, Adam reflected on his performance, saying; “We just lacked pace in that race.

“We made adjustments after qualifying but we just couldn’t seem to find a way of finding a greater amount of speed which means that progress was really hard to make on a track at which overtaking is notoriously difficult.”

Later on Sunday, the Pall-Ex backed driver lined up in 12th position ahead of Race Two.

Unfortunately, the 24-lap race followed a similar trend to the first race of the day, as the Lancastrian found himself stuck in traffic.

The tightly bunched field was bound to see contact and sure enough, Adam was fired off the track by contact from Tom Chilton’s Honda.

The excursion saw Adam lose places and he re-joined the circuit in 14th place.

He was unable to recover any positions before the flag fell, meaning he missed out on the chance of a kind draw in the reverse grid draw for the final race of the day. 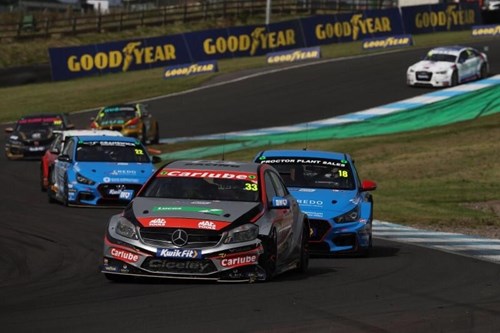 Preparing for the final race of the day, Adam lined up for the start in 14th for the second time in three races.

Once again, the curse of the midfield struck and Morgan found himself bogged down in traffic.

Running so close to the surrounding cars meant the Ciceley man was caught up in a concertina effect going into the final hairpin.

This hold-up gave Stephen Jelley and his BMW the opportunity to out-drag the Ciceley Mercedes down the pits straight, down the hill into turn one.

Adam crossed the finish line where he started, in 14th position, rounding out a frustrating weekend for the whole team.

Speaking after the race, Adam said; “I was quicker than him in some places, but I had to defend in others which meant that I dropped away from the pack ahead.

“14th again in Race Three isn't what we expected after Oulton Park.

“Knockhill is a weird circuit in some respects and it is often hard to get a sweet spot on the set-up.

It’s easy here to go down some blind alleys in the set-up which compromises your weekend, but we got through without damage and we know what to do at Thruxton to try to maximise our weekend.”

The Ciceley Motorsport team now return to their Accrington base to strip down and prepare the cars for the next round of the BTCC at Thruxton in Hampshire, set to take place on the weekend of 19-20th September.

As always, all the live action will be shown on ITV4 and ITV4HD, with timings yet to be released.

In the meantime, you can keep up-to-date with all the latest news from the BTCC, Adam Morgan and the Cicleey Motorsport on Twitter via the following links;