The wheels of the Kwik Fit British Touring Car Championship (BTCC) are back in motion, as Round One took place at Donington Park in the East Midlands last weekend.

Following a considerable delay to start of the season as a result of Covid-19, Pall-Ex supported racer Adam Morgan proved he had not lost any of his race sharpness, by putting in some fantastic performances in the season opener on Sunday.

The Lancastrian collected three Top 12 finishes around the undulating circuit, with a fourth place in the final race of the day the perfect finish to a positive weekend for the Carlube TripleR Racing Mac Tools Mercedes-Benz A-Class, run by Ciceley Motorsport.

With the event taking place behind closed doors, in accordance with Government guidelines, the weekend was a strong return to racing for the Blackburn based team. 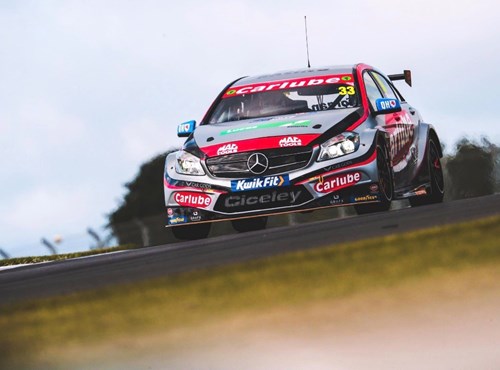 After a 10-month absence, Britain’s premier racing series returned to the track as temperatures soared on Friday, allowing the teams and drivers alike to dial their cars into the track and hone their reactions ahead of the race weekend.

Come Saturday, Adam was in tune with the car and his pace meant the team were positive heading into the 30-minute qualifying session.

Inclement weather and some spots of rain meant that there was a rush to ensure banker lap-times were set, in-case track conditions worsened later in the session.

Adam’s time was good enough for 10th place, but there was plenty left in the tank in his opinion:

“I’m convinced that there was another tenth left in me, but I didn’t quite extract it,” said Adam.

Looking ahead to Sunday, the Pall-Ex backed man was optimistic: “The car feels great. We had a brake issue back at the season launch day but, with a lot of effort by engineer Steve Farrell, we have been through the data, found the problem and cured it. The car feels so much more driveable now.”

On Sunday, Adam’s optimism from qualifying lasted just a few moments into Race One.

In the opening corners, Adam lost ground as a couple of cars slid past. This was compounded by contact with the Honda of Sam Osborne, which opened the door for two more cars to overtake the Ciceley car.

Once the race settled, Adam was able to find his rhythm and began recovering ground and places lost at the start.

Having made it back into 10th place, a solid performance was on the cards until he was forced wide at the Chicane by a late braking Ollie Jackson.

This dropped him back to 17th and a respectable finishing position looked to be out of reach.

However, Adam showed his skill and bravery to battle back into 12th position as the chequered flag fell.

After the race, Adam expressed his frustration; “I was a bit disappointed in that. I lost places at the start and then contact with Sam didn’t help, but the real rub was Jackson taking me off.

I never really got into a rhythm in that race, but it sure is good to be back racing!”

Following his Race One result, Adam lined up in 12th position on the grid for Race Two.

Fired-up following the events of earlier, Adam became embroiled in a race-long battle, allowing him to showcase his racing instincts.

Demonstrating his skill and the inherent pace of the Ciceley Mercedes, Adam crossed the line in eighth place.

After climbing out of the car, Adam was in a much more positive mood. He commented;
“That felt a lot better. I was fully on it in that race and the car felt really good. I set the third fastest race lap and made progress up the order so a lot of boxes were ticked. I’m a happy chap!”

Heading into the final race of the day, Morgan lined up fifth on the grid.

From lights out, the race pace was scintillating, with Jackson, Smiley and Cook leading the way.

After making up one place on the opening lap, Adam had to push hard to hang on to the back of the lead three cars.

With 18KG of success ballast onboard, the task of matching the leaders caused the left-front tyre of the Mercedes to cry out for the race to end, as it endured severe punishment on the clockwise circuit.

Despite this tyre issue, Adam drove brilliantly to come home in fourth place, rounding off a strong season opener for him and the Ciceley team.

Reflecting on the race, Adam said; “I pushed a bit too hard too early I think. The pace was really quick and I just asked a bit too much of the left front, so as the race wore on I couldn’t quite have a go at Josh for third. It was close, but I just didn’t quite have the final tenth to attack him.

Fourth was a good result to end the weekend, though, and the car feels so much better than last year that I am very positive about Brands Hatch next weekend. The Mercedes feels like a new car!”

The results put Adam ninth in the championship and fourth in the Independents’ Trophy.

Round Two takes place this weekend, as the championship moves to the iconic Brands Hatch circuit in Kent.

Saturday’s qualifying session will be shown live on itv.com and all of Sunday’s races will be broadcast live on ITV4 and ITV4 HD from 10:20 AM.

You can keep up-to-date with all the latest from the Ciceley team on Twitter here.­­­