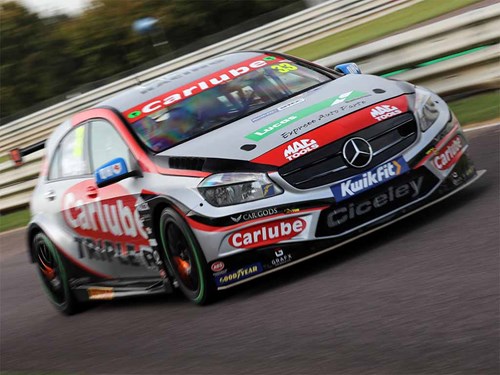 After demonstrating blistering pace in qualifying, clocking the fourth-fastest time, Adam started his momentous race from the second row of the grid.

From here, the Pall-Ex supported racer skilfully piloted his Mercedes Benz A-Class around the Hampshire circuit, eventually coming home to claim fourth place in Race One.

During the race, the car had shown some signs of understeer which had resulted in significant tyre wear, but Adam’s pace was unaffected, as the Lancastrian recorded the fastest lap of the race of any independent runner.

After the race, Adam was positive about his performance and his chances in the races to come.

He said; “I was really pleased with the pace. The car was quick all the way through and I can’t grumble with that at all. That was a really good start to the day.”

The Ciceley Motorsport team decided to make some changes to the set-up of the car in an attempt to reduce the understeer Adam was feeling in the car.

Starting from fourth once again, Adam was hoping to make gains during Race Two and earn a podium position.

Sadly, this wasn’t to be as the O-ring for the power steering unit failed, meaning the car was undrivable and Adam was forced to retire the car from the race.

Bitterly disappointed, he commented; “Again, the pace of the car was really strong, but then sadly an O-ring in the power steering unit failed.

It costs about 50 pence probably and we’d already changed it before we came here, but when the power steering goes, it is impossible to turn the wheel so that was the end of my race and put me at the back of the grid for race three. That was a big blow as we were running in fourth place at the time.”

The team quickly repaired the faulty O-ring and Adam was ready to start Race Three from the back of the field, with a  big task on his hands if he wanted to salvage a points-scoring position from the race.

Adam battled bravely and in-spite of drama at the final chicane on the opening lap and was battling for 17th position with Stephen Jelley as the race neared its conclusion.

Unbelievably, the final lap saw another failure of the O-ring, meaning Adam was unable to finish for the second time that day. 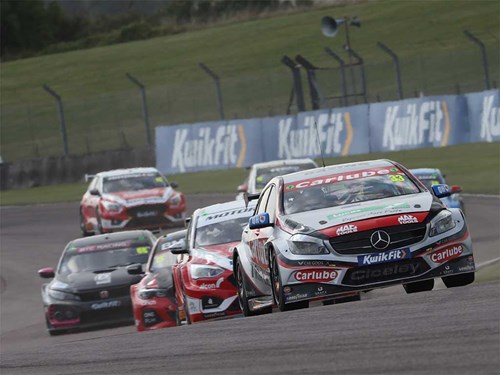 Once he returned to the garage, Adam reflected on what could have been, saying; “I couldn’t believe it! A component failure is something that we haven’t suffered for a long time and, as yet, we don’t know what is causing it. It’s odd to have two go in two races, and we don’t have a lot of time before Silverstone to analyse it.

“The positives are that I have driven well across all sessions, the pace has been really good with me in the top five all weekend and the set-up has been strong all weekend, so there are many encouraging elements to the weekend, plus my qualifying effort was a step forward.

We could, should, have had three top-five finishes and maybe a podium. It was nothing I did wrong nor the team did wrong: it was a brand new part that failed twice so that is out of our control. Next stop is Silverstone next week and I will be going all out for points and a podium.”

Adam heads to the next round at Silverstone, this weekend, eighth in the overall championship and fourth in the Independents’ Trophy.

As always, all the live action will be shown on ITV4 and ITV4HD, from 11 AM on Sunday 27th September.

In the meantime, you can keep up-to-date with all the latest news from the BTCC, Adam Morgan and the Cicleey Motorsport on Twitter via the following links;