A west London based entrepreneur is celebrating 25 years in the logistics industry by moving into a new 30,000 sq ft warehouse, having successfully swapped spinning discs for spinning wheels.

A west London based entrepreneur is celebrating 25 years in the logistics industry by moving into a new 30,000 sq ft warehouse, having successfully swapped spinning discs for spinning wheels.

Former DJ, Adam Hopcroft, founded Pall-Ex network member Premier Palletised Ltd (PPL) in 1993, after launching the business in a bedroom of his council flat in NW10.

It has grown from taking £350 in its first week to an annual turnover of over £5 million, has increased its workforce from one to 52 and now operates a fleet of 40 vehicles, including 26 tonne crane vehicles.

The company joined leading pallet network Pall-Ex in 2003, which has supported its growth over the last 15 years.

Adam Hopcroft, managing director at PPL, comments: “I was in the pub one night and a friend of mine mentioned they had spent £600 on cabs that day, I said ‘I work at night so I could do some of that’, so I started doing the odd job here and there with a transit van. It grew quickly, particularly the work I was doing with Spicers Stationery, so I started adding drivers.

Joining Pall-Ex has definitely been instrumental in our growth, as it has allowed us to take on contracts knowing that we’re in a stable financial position with a blue chip company and it has also allowed us to compete nationally for work.

“We’ve struggled for space for the last 16 years, unfortunately London prices and business rates mean that you cannot afford to ‘grow into’ premises, which makes it very difficult for a business like us to plan ahead. We have been looking for years, but looking seriously for the last six years; there is a massive shortage of warehouse and open space in London, as everything seems to be getting smaller.”

Kevin Buchanan, Group managing director, comments: “We are very proud to call PPL a Pall-Ex member and are delighted to celebrate this milestone with them, which is all down to Adam’s determination and vision. We welcomed PPL into our network 15 years ago and are pleased to have been able to support them with growing their business. We look forward to continuing our relationship long into the future.” 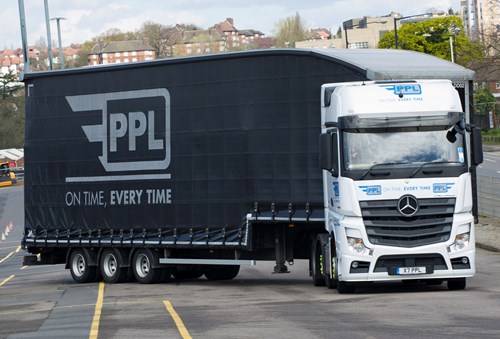 For PPL, the benefits of being part of a pallet network are wide ranging.

Adam adds: “It goes without saying that pallet networks in general are eco-friendly, because it eradicates all the dead mileage; maximising vehicle space reduces our carbon footprint and means customers and the planet benefit from what we are doing.”

To celebrate its 25th anniversary and move to new premises, PPL will host an open day on Friday 6th July between 2pm and 4pm, with steel band, ice cream van, barbecue and other events, on top of drinks and snacks.

Pall-Ex Group was formed by renowned entrepreneur Hilary Devey CBE in 1996 and is an award-winning network of quality hauliers, which collaborate to deliver leading palletised freight distribution services throughout the UK, Europe and beyond. With its headquarters and central UK hub located right at the heart of the Midlands, Pall-Ex has grown phenomenally since its inception in 1996.

For more information on joining the Pall-Ex network, visit www.pallex.co.uk.