Moody Logistics and Storage has recruited a further two driver apprentices to its own fast track training programme. 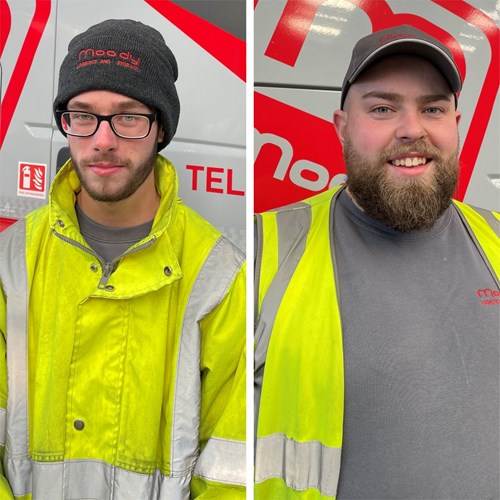 Alex Elrod (L) and Steve McLetchie (R) are following the examples of Joe Chan and Tony Hunter, both 24, who gained their Class 2 licences within five months.

Northumberland-based Moody’s launched the scheme last spring to overcome the lengthy delays hampering the government-backed driver apprenticeship scheme, which takes between 12 and 18 months to qualify.

The Department of Transport has even been highlighting the examples of Moody’s own in-house apprentices as a way of encouraging people to consider truck driving as a career.

Both Joe, who gained his licence in four months, and Tony, who passed his Class 2, in five, are currently making collections and deliveries across the North East.

Caroline Moody, managing director of the Cramlington firm, said: “Our own apprenticeship scheme is allowing us to produce qualified drivers within a much shorter time span, without compromising the quality of their training.

“As a result, the average age of a Moody’s driver is now 44, compared with the national average of 56.

We received hundreds of applications for our driver apprentice positions, so there’s no shortage of people wanting to pursue a career in logistics. Developing our own programme has allowed Moody’s to insulate itself from the problems surrounding recruitment and the nationwide shortage of HGV drivers."

“It’s great to attract younger people into the industry and, by contracting the training process, it means they can earn a higher wage much sooner while the company gets an employee fully able to contribute to the success of the business.

“We must be doing something right, when the Department of Transport seeks to promote what we are doing.”

Steve McLetchie, 28, of Blaydon, is already on the road, driving light vans, whilst Alex Elrod 20, of Blyth, is combining his driver training by gaining experience in the warehouse.

Steve said: “I’m really impressed with the efficiency of Moody’s in-house apprenticeship. I’m surrounded by experienced drivers who offer me guidance while I’m gaining practical experience every day which is proving invaluable as I work towards my Class 2. It’s also important to me to be part of a family business where I’m valued.”

Alex added: “I’ve already gained my forklift licence since joining Moody’s and I’m learning so much in the warehouse providing support to the drivers – which is all excellent training for when I become a driver myself.”