Pall-Ex Group has put the wellbeing of its employees and the planet first by giving reusable drinks bottles to all its staff across the UK. 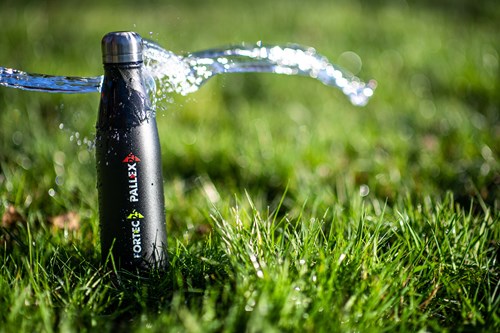 The initiative, which saw stylish vacuum flask type bottles given to the 500 staff members across Pall-Ex Group’s six locations in the country, was part of the Group’s 25th Anniversary celebrations.

Each bottle was personalised with the individual’s name and the gift proved to be extremely popular with everyone involved.

It is hoped that the drinks bottles will help to promote healthy living by encouraging employees to drink more water, and according to Bupa, adults should drink between 2 and 2.5L of water a day as part of a healthy, active lifestyle.

The bottles are especially useful to Pall-Ex Group’s HGV drivers, who used to rely on bottled drinks whilst on the road as it allows them to take fresh tap water, coffee or tea with them wherever they go.

In addition to the obvious health benefits, the reusable bottles will reduce plastic waste that is caused by disposable bottles and coffee cups, as the logistics company continues to take steps to reduce its environmental impact. 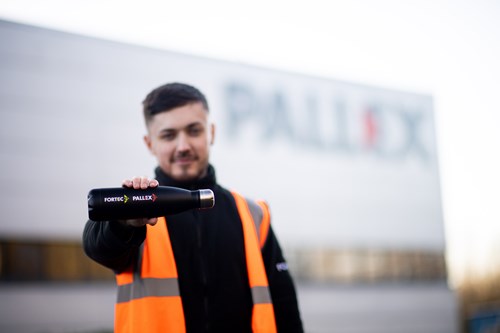 Standard polyethylene terephthalate (PET) bottles that have reached even the furthest corners of the globe take at least 450 years to completely degrade, and bottled water requires more than 2,000 times more energy to produce than tap water according to National Geographic.

That time frame means that a bottle produced during the reign of Tudor Queen, Elizabeth I, would still be around today!

Ensuring that Pall-Ex Group reduces its impact on the planet was one of the driving forces that influenced Group CEO Kevin Buchanan and the senior management team when opting for the water bottles.

Kevin comments: “Not only do we care about our staff’s wellbeing and encourage healthy habits such as keeping hydrated, but we also wanted to give something back outside of the business."

We recognise our responsibility as an employer of choice to look after our people and our planet, so giving each of our team a reusable water bottle will have a really positive impact for our staff and business as a whole, as well as the environment thanks to the waste saved in the short and longer term.”

As the Group celebrated its 25th Anniversary late last year, the bottles were not the only initiative it undertook to mark the occasion.

The palletised freight distribution company, which owns two networks, Pall-Ex and Fortec, also donated £25,000 in total to 25 different charities around the UK, which were nominated by Pall-Ex and network members and staff.

These charities included St Richard’s Hospice in Worcester and Keswick Mountain Rescue in the Lake District.

Having celebrated its 25th Anniversary, Pall-Ex Group is looking forward to a successful future, with the personalised bottles another sign that it is on the right course.

To find out more about Pall-Ex Group’s commitment to its people and the environment, please visit: https://www.pallex.co.uk/about-us/our-vision/.