Operating for the better part of a century, Moody Logistics is a long-standing member of the Pall-Ex network. Find out how they continually drive for growth.

Moody Logistics was established in 1947 by David Moody, the grandfather of current Managing Director, Caroline Moody. Initially, David delivered bread and cakes after the war using a horse-drawn cart. 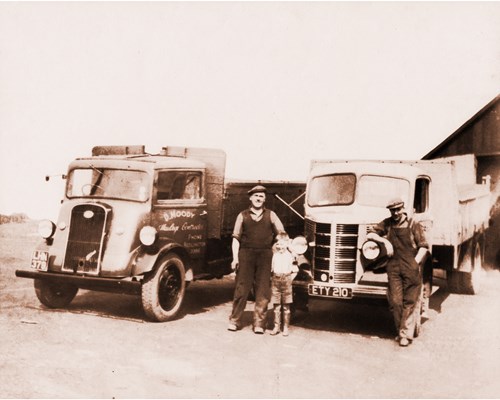 By the 1970s, Moody Logistics had grown in size to 40 tipper trucks, flatbeds and skips, and a workforce of 45 people.

“The current directors, myself, my brother Richard and my brother-in-law Gavin, are now the third generation of our family to run the business.”  - Caroline Moody, Managing Director, Moody Logistics

In June 1999, under the leadership of Alan Moody, Caroline’s father, Moody Logistics joined Pall-Ex and has remained an important member of the network ever since. They focus mainly on NE postcodes and often help out other members in times of need.

Caroline Moody notes, “We’re very proud of our deep-rooted family background and continue to see the business as family-run and operated, even as we’ve grown.”

The Moody Logistics and Pall-Ex partnership

According to Caroline, her father initially joined Pall-Ex due to a much better delivery range than their previous network had been able to offer. Alan also wanted to grow the business in the overnight pallet market, which he could see as a growth area in the transport sector compared to the tippers they’d used previously.

Caroline continues, “We also wanted to become more competitive in our industry and enable pallet collections as late as tea-time to go through the network and arrive at their destination the following morning anywhere in the UK, and we trusted that Pall-Ex would help us do this.

“Overnight pallet delivery makes up around 70% of our overall business. Back in 1999, this was quite a new concept in the industry, but Pall-Ex has grown with its success, and so have we.”

Moody Logistics has been proud to offer its services to major high street retailers, such as Staples. Caroline notes, “Earlier this year we were recognised by Staples for Delivery Excellence – something we’re incredibly proud of.”

“Customers have been extremely impressed with the ability to track their own shipments, and the system has meant that we can offer a truly transparent delivery service, reinforcing our corporate ethos for Delivering Trust and Reliability.”

In addition to the technological improvements, being a member of the Pall-Ex network for such a long time has meant Moody Logistics has experienced first-hand the community of Pall-Ex hauliers.

Richard explains that “It’s a pretty close-knit community, with members help us in times of need and vice versa. We’ve built strong relationships and continue to do so. We’d like to think that as one of the founding members we’re a great asset to the network.”

An extra benefit that Richard noted was the location of the South hub, which allows the company to reach all of their UK destinations on a single man trunk.

The future of Moody Logistics

As Richard explains, “Adapting to the changing requirements of the transport industry has given us the advantage of being a flexible yet robust haulier, in operation for over 70 years.”

Moody’s greatly values its team of staff, too, and sees them as integral to the success of the business to the present day.

“We truly value our staff and see them as the lifeblood of the business – without such dedicated people we wouldn’t be the award-winning business we are today.”
- Richard Moody, Operations Director, Moody Logistics

Moody Logistics also has a sister company, ran by Caroline’s brother-in-law, called Heathline Commercials (named after Caroline and her sister Heather), which repairs and maintains the fleet, offering its services to other commercial fleets, too.

Caroline notes, “Heathline Commercials, which supports and strengthens our services, is also expanding, with a purpose-built workshop currently underway.

“We’re always looking for ways to improve and grow our business – this is just the beginning of our ambitious plans to really drive the business forward.”

Do you want to find out about the opportunities Pall-Ex could bring to your company?