Aylesbury Logistics' "Get Your Bangers Out" charity challenge

A convoy of cars destined for the scrapheap has completed the mammoth 1850 mile journey from Land’s End to John O’Groats in aid of charity.

A convoy of cars destined for the scrapheap has completed the mammoth 1850 mile journey from Land’s End to John O’Groats in aid of charity.

Nine teams took part in the ‘Get Your Bangers Out’ challenge (GYBO), spanning from Friday to Monday morning,  with the aim to raise money and awareness for Sparkles, a charity supporting children living with Downs Syndrome in and around Buckinghamshire.

Organisers, Dave Young, Simon Redford and Lewis Bleasdale, owners of Pall-Ex member, Aylesbury Logistics Ltd, all took part too, and are really pleased with the weekend.

Dave comments; “The weekend can only be described as a huge success. There were so many highlights along the way, and the support from the public on both social media and the roadside was overwhelming. We didn’t believe for a second people would show the support they did." 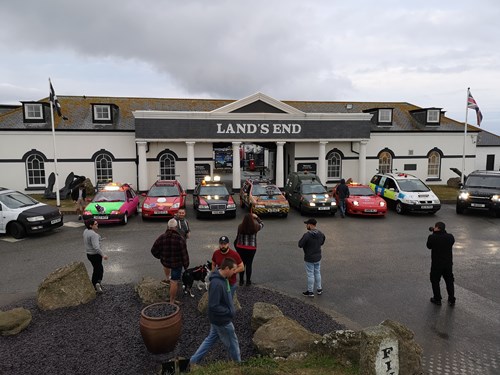 The journey began at the most westerly point of the UK, Land’s End in Cornwall on Friday morning at 7:30 am.

The convoy then headed northbound, and over the next three days completed the gruelling journey to the top of Scotland, stopping only for sleep and fuel.

The winners of the challenge were team ‘Piston Broke’ in their unicorn themed Ford Escort.

The team are already looking forward to next year’s event and is encouraged by the success of GYBO 2018.

Dave says; “At the moment it looks like we will raise over £7,000, which is amazing!

No-one expected GYBO to be what it became; we camped, made friends, laughed so much, and the convoy had a fleet of radios that kept everyone in the loop!"

GYBO will return in 2019, and it is hoped more teams will take on the challenge in aid of Sparkles.

For more information about the Get Your Bangers Out challenge and to donate, please visit; https://www.justgiving.com/crowdfunding/getyourbangersout2018